No cup shock by YMCA as Boucher strikes late 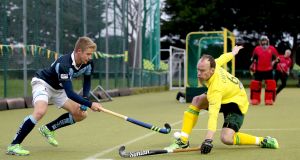 South African international Shannon Boucher denied YMCA a cup shock as Glenanne belatedly pulled clear to take their place in the final four of the Irish Senior Cup, winning 5-3 in a thrill-a-minute encounter.

The Y, the last remaining team from outside the national league, led three times against the Glens, with Ben Campbell, Eric Prehn and Andrew Jones on the mark. However, Boucher dashed the hopes of their Dublin rivals when he deflected in for the equaliser at 3-3 before nicking two more down the closing stretch. It brings his tally to 17 goals for the club since arriving in the country.

Another South African, Jody Hosking, continued Three Rock Rovers’ fine season as he nabbed a 2-1 win in the last minute at Cork C of I. Hosking had given Rovers the lead early in the second half but Stephen Sweetnam tied things up with barely two minutes left as Cork sniffed a shoot-out. But Rovers forged one last opening with Hosking’s shot taking a couple of deflections en route to goal for the clincher. The Rathfarnham club are now through to their second cup semi-final and sit in the top four of the EYHL with a very young team.

Monkstown completed the final four with a 4-1 win over Pembroke. It was tight in the first half as Alan Sothern and Jonny Bruton exchanged corner goals. The crucial goal came from Andy Ward, sliding on to Gareth Watkins’ cross-shot. Bruton and Geoff Cole closed out the result in the last 10 minutes.