Loreto fight back to defeat Old Alexandra in Hockey League 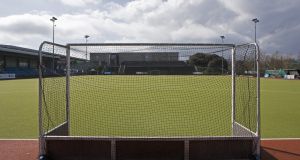 Hannah Matthews sealed the points for Loreto when she scored from a penalty corner against Old Alexandra. Photograph: Laszlo Geczo/Inpho

There’s no change at the top of the Hockey League after Loreto, Pegasus and UCD all picked up wins on Saturday, five of the bottom six sides losing their latest fixtures in the competition with Ards and Muckross now adrift on one point each at the bottom of the table.

Having kept four clean sheets in their previous five games Loreto’s defence was breached by Emma Russell after just three minutes of their meeting with Old Alexandra, but Ali Meeke levelled for the leaders from play before her international team-mate Hannah Matthews sealed the points when she scored from a penalty corner.

Pegasus, beaten by Loreto the previous weekend, returned to winning ways with a 4-2 defeat of Cork Harlequins at Farmer’s Cross, Taite Doherty putting the visitors 2-0 up inside the first 15 minutes. They were both fine goals too, the first following a lovely exchange of passes between Doherty, Alex Speers and Kate Gourley, the second starting with Shirley McCay’s hit-out which found Speers on the right, her first time pass putting Gourley through, Doherty tapping home after Gourley set her up.

Cliodhna Sargent pulled a goal back for the home side from a penalty stroke but McCay restored the Belfast side’s two-goal advantage just before half-time with another stroke. An unmarked Emily O’Leary turned home Yvonne O’Byrne’s long pass from the right to bring it back to 2-3, but with six minutes to go Speers ended Harlequins’ resistance when she weaved her way through the home defence and slotted the ball past Lorna Bateman.

Back in Dublin, Pembroke Wanderers had the better of the opening stages of their game against UCD but, against the run of the play, the students took a first-quarter lead through Michelle Carey. It was Niamh Carey who created the opening for Nina Heisterkamp to make it 2-0 before half-time, Leah McGuire adding UCD’s third after Sinead Loughran had pulled one back for Pembroke.

Railway Union, meanwhile, picked up their second win of the season with a first-quarter Hannah de Burgh Whyte strike from a penalty corner before Katie Fearon finished off of a second-half counter-attack to give them the points against Muckross.