He’s already portrayed his father in a movie; now comes the hard part for the teenage star 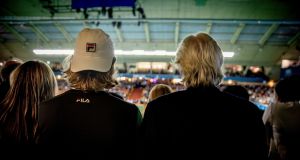 When he was 10, Leo Borg sat his mother down and told her something that made her cry: He wanted to be a tennis player.

Until then, Patricia Borg had quietly held out hope that the athletically gifted Leo might choose some other path. When he was a bit younger, coaches from a soccer club told her that he was one of the brightest talents they had scouted in a while. Patricia liked to remind Leo of that from time to time.

Tennis though? That was the realm of her husband, Björn Borg, who won 11 Grand Slam singles titles over a relatively brief career, claiming a place among the greatest players ever. To Patricia Borg, therefore, the idea that her son would take such a liking to the game, and that he would show such promise in it, seemed almost a cruel twist. His father’s shadow, she thought, would always be too long.

“And so I was crying,” she said. “We tried to get him into another sport, just so he wouldn’t be compared with his father. It would be so much easier. I was scared.”

Raising an aspiring athlete can be perilous for any parent. How do you provide encouragement without being overbearing? How do you balance precocity with just being a child? As sports figures like Michael Jordan and Joe Montana and Zinedine Zidane have learned, these questions are magnified and multiplied when you are one of the most famous athletes in the world.

Björn and Patricia Borg wrestled with these concerns themselves. Eventually, their hesitance gave way to a determination to handle it right.

Now 15, Leo Borg is one of the best young players in Sweden. He trains twice a day, before and after school, and when he finishes his compulsory education next spring, he will commit to tennis full time. His ambition is to be a professional player. He and his parents know there is a long way still to go.

“He’s always going to be reminded of me, and that’s kind of a burden for him,” Björn Borg said. “So I don’t put pressure on him, and I try to make sure that the life he lives doesn’t give him any pressure. That’s our task. That’s our way of helping him. Then, the only person who can put pressure on him is himself.”

Last month at the Stockholm Open, on the court of the Royal Tennis Club, Leo Borg received a prize of 100,000 Swedish krona (€9,750) as the top player under 16 this year, when he reached the finals of the four biggest junior tournaments in Sweden and won two of them.

The Royal Tennis Club, outfitted with its original wooden stands, felt like a living monument to Swedish tennis history. There were photographs and illustrations of Björn Borg everywhere. And because the clothing brand named for him was one of the tournament’s sponsors, the entire event staff – ball kids, ushers, ticket collectors, everyone – wore clothing with the word “Borg” printed in big letters.

“I understand it,” Leo Borg said of the omnipresence of his father. “It’s not bothering me so much. I’ve always known who is my dad.”

That day, Leo Borg helped out as a hitting partner for pros like Tennys Sandgren and Chung Hyeon. He wore shorts, high socks and a backward cap over his swaying blond hair, and his vibe of unperturbed, teenage insouciance made his parents’ initial concerns seem almost ridiculous.

His first exposure to tennis, he said, occurred when he was six, whacking a ball against a wall in his paternal grandmother’s basement. (His father, as a child, did the same against his mother’s garage door.) Leo loved playing tennis with his father when he was younger, but he said they rarely had the chance anymore.

When asked if he had ever seen one of his father’s matches, Leo shrugged.

He thought about it some more, as if to make sure. “No,” he added, finally. “Not a single match.”

His parents laughed when the story was relayed to them. Leo’s favourite player growing up was Rafael Nadal; Patricia said her son was comically indifferent to her husband’s accomplishments.

Björn Borg has been happy to keep it that way. Rickard Billing, 46, who has coached Leo for the past five years, said the Borgs were calmer than the average tennis parents, and calculatedly detached. Billing said he idolised Björn Borg growing up and admitted he still had a poster of him at home. But he described the coach-parent relationship with his former hero as pleasantly uncomplicated.

“I’m a player and a parent,” Borg told Billing the first time they met. “The coaching is your business.”

There was one time, though, that Leo Borg did try to embody his father. When he was 12, he and his mother responded to an online advertisement seeking young actors in Stockholm who could play tennis. Only later did they realise the role: to play Björn Borg, as a child, in the film “Borg vs McEnroe.”

At first, Björn Borg told his wife he was against the idea: Was it smart to let his son pretend to be him in a big international movie, given all his concerns about casting a shadow over him? “I tried to protect him,” Borg said.

Janus Metz, the Danish director of the film, was unsure, too: Would the tennis legend try to assert some control over the film’s narrative now that his son was involved? But Metz’s reservations vanished when he met Leo. The physical resemblance, he said, was striking. But more than that, Metz perceived in the boy’s eyes a vague yet familiar quality: “that shy vulnerability and sort of hellbent willpower that’s so special to Björn.”

Leo Borg’s scenes included one in which he re-created his father’s childhood garage-door practice sessions and one that required him to throw a tantrum on court.

“It was so real,” Metz said. “I could get lost in his face and his eyes from behind the camera, take after take, because it would just spill out of him.”

Björn Borg came around to the film, too. Metz said Borg cried during the filming when he showed him a rough cut of one of the final scenes of the movie, which depicted the quiet moments after his final Wimbledon win in 1980 with the melancholy song “Stars,” made famous by Nina Simone, playing in the background.

Afterward, Patricia Borg felt a flicker of hope again, however briefly, that her son might have found a non-tennis calling. “I thought he was a born actor,” she said, beaming. “He was so good. I was saying maybe he should go into acting.”

It was not to be. She laughed as she recounted a trip she and her son took to Cyprus this summer for a tournament. On a charter flight there, they were told that “Borg vs McEnroe” would be shown on their scheduled flight home. At her son’s request, they flew back a day later than planned, on a different plane.

Understanding that his presence would be a distraction in many tennis clubs around the world, Björn Borg has left it to his wife to do much of the travelling with their son. But distractions have occurred, anyway.

Last year, at Les Petits As, a prestigious junior tournament in Tarbes, France, Leo Borg unexpectedly had to do a news conference and was followed by a pack of photographers who had realised he was the son of the tennis great.

Patricia Borg said they had to run away at one point to elude a pack of people following them. Billing said there were adults asking to take selfies with the teenager. In his second match, Billing said, Leo Borg lost on purpose. The commotion had overwhelmed him. He wanted to go home.

“He was not prepared for that,” Björn Borg said of the episode, which he did not witness. “I felt bad because he felt terrible.”

Yet Borg thought it could be an important experience for his son. If Leo continues on this ascendant path, the attention will only grow.

Nina Wennerstrom, who has been working with the Borgs for a year as Leo’s agent, said she was navigating the delicate path between acknowledging the famous family name and letting the teenager forge a distinct identity. This year, he signed his first sponsorship deals, with Fila, whose clothing his father wore, and the equipment company Babolat.

“I think he and the people surrounding him are handling it very well, recognising it, but not focusing on it,” she said of the familial connection, “because that’s not going to help him achieve his dream. In sport, there are no shortcuts. It doesn’t matter what the name of your parent is.”

In the end, Leo’s success will be determined on the court, by him. He said his goal now was to grow stronger, to add muscle to his spaghetti-thin frame. After completing school next year, he will continue to be based in Stockholm while he looks for opportunities to play and train overseas.

His parents are committed to supporting him, perhaps hoping, half-seriously, that he still may have a change of heart. “I’m still trying to find another way,” Patricia Borg said, smiling. “Baseball?” – New York Times service