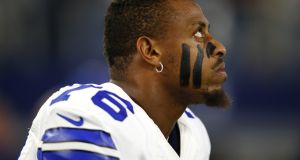 Greg Hardy of the Dallas Cowboys: the NFL suspended the player for 10 games (reduced to four on appeal) after Nicole Holder said he had assaulted her. Photograph: Jamie Squire/Getty Images

Some of the Philadelphia Eagles said they took pleasure in putting particular venom into their hits on Dallas Cowboys star Greg Hardy on Sunday after photos emerged of the domestic violence incident involving his ex-girlfriend.

“Any time I had a chance to put a little extra mustard on a block, I tried,” Eagles player Lane Johnson told the Philadelphia Daily News. “He wasn’t all that emotional in the game. I guess he is in other games. I don’t know if the stuff got to him on the news, but he kind of seemed out of it a little bit.”

The NFL suspended Hardy for 10 games (reduced to four on appeal) after his former partner Nicole Holder said he had assaulted her. Although charges against Hardy have since been expunged, the photos released by Deadspin on Friday appeared to corroborate Holder’s version of events.

“I’m glad he didn’t have a good day,” said the Eagles’ Jason Kelce. “It’s a joke a guy like that is able to play this quickly. Three people I have zero respect for in this world. People who hit women, who molest children and rapists.”

Hardy recorded the Cowboys’ only sack during their defeat to the Eagles but was far from his best. Dallas owner Jerry Jones reiterated his commitment to Hardy, saying the player deserved a second chance.

“I’m a father of three daughters so any man that beats a woman, I think that’s hard for me to swallow but the Cowboys did make their choice [to sign Hardy] ,” Bennett said. “[The Cowboys] have had a bunch of players before that had a couple things. As a team-mate, I’m not sure I would want him in the locker room, especially as a distraction when you’re already losing.”

The Cowboys’ defeat was their sixth in succession. – (Guardian service)