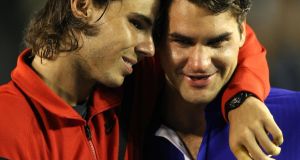 Best of rivals: Rafael Nadal and Roger Federer at the Australian Open in 2009. Photograph: Greg Wood/AFP/Getty

Roger Federer and Rafael Nadal, deeply linked in their own minds and in the public’s for more than a decade, have even more in common now. Until 2016, Nadal was the only one of the two tennis superstars who had dealt with significant injuries, who understood how it felt to watch major events unfold from a distance as his rivals held up championship trophies. But Federer is now, for better or worse, part of that club after missing much of last season because of knee surgery, and he is looking to Nadal for inspiration as they return to Grand Slam tennis at the Australian Open after encouraging early-season results.

Federer, 35, remains the senior statesman and leading ambassador of the men’s game, as the big crowds in Perth during his recent Hopman Cup practice sessions and matches made clear. But it is Nadal, five years younger, who has the experience in the comeback department.

“The thing is, Rafa’s always been unbelievable at comebacks,” Federer said in an interview last month. “He’s one of the guys who’s done it the best and the most almost. Every time he came back, he was always in the mix again to win big tournaments and be really, really difficult to beat and be one of the favorites, even on his weaker surfaces. So I think maybe on this occasion, he’s going to lead the way for me, to show how it’s done.”

Nadal is also the one making clearer plans for when he does finally retire. He opened his own tennis academy on his home island of Majorca in October, and Federer took a break from rehabilitating in Switzerland to be present for the ribbon-cutting.

It was a moving scene: the two longstanding rivals seated side by side in a new facility that might never have existed if they had not pushed each other to improve and endure. It is also worth asking how many still-active tennis stars would have made such a journey to help a player who has dominated their head-to-head meetings. (Nadal’s career edge over Federer remains lopsided at 23-11.)

“I was so blown away by that academy and by what Rafa was able to build there,” Federer said. “I think it’s so brave and cool that he did this for his home island and home village, and everybody is involved: his girlfriend, his sister, his parents, his agent, whoever. Everybody is full-on into it, and I just felt it was only the right thing to do, to help him out, because I asked myself what would I hope for. And my answer was that I would hope my biggest rival would call me up and say, ‘You need my help? I’m there.’

He added that it was “super-touching for me to be there with him, and he seems also very emotional about it, that I came, and it was great.”

Federer has no plans to open a Federer academy in Switzerland or elsewhere, although he has had offers. That is in part because he has no desire to compete with the Swiss tennis federation and the player development programmes that helped him nurture his talents.

Federer expects that when he does retire, he will be working with his foundation, which is focused on supporting educational opportunities in southern Africa and Switzerland. He also foresees playing a role in the Laver Cup, a team competition between Europe and the rest of the world that he helped create and that will be held for the first time in September.

But the rest of the life-after-tennis plan remains unclear, even after his six-month break from the game.

“During the break, I was really focused on trying to come back and on the kids,” said Federer, who has four young children. “I had more time to have conversations, but it didn’t lead to anything like ‘Oh, this is something I really want to do’. I always told myself I want to keep somewhat flexible and open when I do retire; that I don’t have to jump into the next thing right away.”

For the moment, he and Nadal are talking about playing for at least two to three more years. This seems wise, in terms of their ticking biological clocks and also in avoiding having to field constant retirement questions.

“The thing is, Roger and Rafa can still win big titles – it’s the matter of doing it over the whole year that’s the challenge,” said Paul Annacone, who formerly coached Pete Sampras as well as Federer. “But I don’t see a reason why people should even wonder. Rafa can win the French Open playing average tennis for him, and Roger can win Wimbledon playing good. And there’s no reason why they can’t do that this year or for a couple more years if they stay healthy.

“I’ve always felt, and I think Pete proved it over a decade ago, [that] great players at the end of their career can play great. It’s just harder for them to play great for a whole season. Roger and Rafa can play seven matches over 14 days, but can they do it for 10 months?”

Based on recent results, the answer is probably not. Each produced sparkling tennis at times in 2016, Federer at the Australian Open and at Wimbledon, Nadal during the clay-court season before withdrawing from the French Open with a left wrist injury. But the reality is that Federer has not won a major singles title since Wimbledon in 2012 and Nadal has not been past the quarter-finals in any major since winning his ninth French Open in 2014.

Meanwhile, the younger generation, led for now by Dominic Thiem and Nick Kyrgios, has gathered strength and confidence, and Federer’s and Nadal’s long-term rivals Novak Djokovic and Andy Murray have continued to rule. In Brisbane last week, Nadal was beaten in the quarter-finals in three sets by Milos Raonic.

“Tough loss, but good signs,” said Annacone, who was there. “Rafa was hitting big and offensive. My opinion is when he proactively looks to get on the baseline, he is a different player, especially on hard courts. I saw that often in Brisbane.”

In Perth, Federer won two of his three singles matches but lost in three tiebreaker sets to 19-year-old Alexander Zverev of Germany.

“All in all, the tennis, movement, enthusiasm and delivery was as good as Roger could have expected from this week after such a long layoff,” said veteran coach Roger Rasheed, who was in Perth. “I’m not surprised at all. If his body feels free, then his tennis is still available to him.”

Federer has long been open to adaptation, changing coaches, advisers and rackets. Nadal has been much more resistant, but, overdue or not, he has taken a chance this year by adding Carlos Moya to his coaching team after Moya decided to split with Raonic.

Moya, who is expected to join Nadal for the Australian Open, was the first player from Majorca to win the French Open and reach number one and has been hitting with and advising Nadal on an informal basis since Nadal was a boy. But Moya could still be an important new voice on match days and is quite capable of making technical or tactical tweaks. Even if he offers much the same advice that Nadal’s coach and uncle, Toni Nadal, has been offering for years, it could resonate differently.

“I think he’s someone Toni is probably very comfortable with,” Annacone said. “There’s no threat there, and it’s not like Carlos is going to be riding in on his white horse beating his chest. He’s just trying to add some key things at big moments, so I think it’s a really smart addition.”

However it turns out, Nadal’s willingness to adjust his brains trust is something else that he and Federer now share.