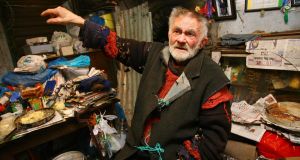 Mick Murphy, who won the Rás Tailteann in 1958, was also an acrobat, rower, weight lifter and sporting philosopher.photograph: Valerie O’Sullivan

We were somewhere between Glenbeigh and Caherciveen, the sun laughing in our faces from across the openness of Dingle Bay, the brilliantly warming Indian summer breeze pressing gently against our backs, our gateway to south Kerry now opening in all its glory.

If there was the perfect day to cycle the Ring of Kerry, it may well have been last Tuesday. It wasn’t a race, but we were determined to ride hard and to finish or be damned. And there was certainly no lack of inspiration along the way.

“I think Mick Murphy lives up that hill,” I told our mini peloton, pointing left and into the still sweet blooming ferns and magnificently empurpled landscape. I wasn’t sure, because I’d never actually been up to meet him.

But much of the legend of Mick Murphy – especially in these days of chronic overuse of that word – was his eccentrically isolated existence and his utter disregard for sporting celebrity. He was also a mad bastard, long before that became any sort of compliment, and soon became known as the ‘Iron Man’, again before that took on another connotation.

Still, his achievements in Irish cycling are so unique they should never be forgotten. So I promised myself again to go up and meet him someday, before we rode on, out of Caherciveen and on towards Waterville – along the same stretches of roads that Murphy would have rode countless times, in all conditions. For us, on light carbon bike frames and rigid aluminium wheels, it was sheer pleasure: for Murphy, at times, it must have been sheer torture.

Indeed Murphy represented that era of Irish sport when hardiness was the ultimate virtue, and when extraordinary sporting achievement could be taken for exactly that: if, today, Murphy came out and did what he did in a bike race then nobody would believe in him, which further intensifies the sense we will never see his likes again.

When, in 1956, he was beaten in a mile race in Sneem, despite getting a 100-yard handicap, he turned solely to cycling, further inspired by witnessing the Rás pass through Tralee that summer.

Like all legends, Murphy was either ahead or somehow out of his time. He’d also become captivated by the circus acts of the era, engaging with the performers, discovering the importance they placed on diet and training (nettle juice, raw meat, and goats’ milk just some of his pre-race favourites, his weight training carried out with self-made barbells and various stone implements).

Still, what turned Murphy into the lasting legend he became was the incredible nature of his 1958 Rás victory, which began when he took the lead on stage two, from Wexford to Kilkenny. Only Murphy’s stage didn’t end there: he then cycled around 30 miles, to “cool down”, before finishing up in a quiet field to do weight training for an hour. Then, after locating a suitably docile cow, he used the small penknife he always carried in his sock to cut a vein in its neck, letting the blood run into his water bottle, which he promptly drank.

Murphy actually termed this a “transfusion”, and admitted to performing it several times during the race. He mightn’t get away with it these days, and not just for health reasons, but again his was the era of total transparency, in a different sense. And while Murphy might well have produced the sort of abnormal blood value which this week left Paula Radcliffe trying desperately to defend her extraordinary sporting achievements, would anyone have doubted him?

Anyway, Murphy would need more than just cow’s blood to get him to the finish of the 1958 Rás. On stage three, from Kilkenny to Clonakilty, his bike jammed approaching Glanmire, so he famously “borrowed” a farmer’s bike to stay in the race. The following day, on stage four into Tralee, he crashed on wet roads approaching Glangarriff, landing hard on his left shoulder. Instinctively, he got back on his bike, finishing that stage torn and bleeding, and with a broken collarbone. Obviously in agony for the next day’s stage, into Nenagh, Murphy somehow survived, fuelled by flasks of hot tea mixed with brandy. He crashed again, on stage seven, into Sligo, although by then nothing could stop him: he rode from the front on the last stage, for 100 miles, and in the end won that Rás by five minutes.

“Attack is the best defence,” is how he described his race tactics. “And I have no doubt about it, I was the greatest solo rider in Ireland, I was a different breed.”

Indeed he was: after his third Rás, in 1960, Murphy never rode competitively again. He later moved into professional wrestling, spending some time on the London circuit, and later still toured much of Britain and Germany, performing as a sword swallower and fire-eater, while also working as a bricklayer to help pay his way. Then he settled back in Sugrena, declining to draw the State pension, living without electricity or running water, in a house he proudly modelled on a chicken shack.

Then yesterday afternoon, still contemplating why Radcliffe was trying desperately to defend her extraordinary sporting achievements, I heard that Mick Murphy had died, aged 81, part of the sadness being that I’d never been up to meet him, and that we are now in a truly different sporting era.