Lynch may get podium finish 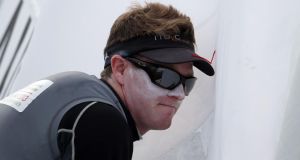 With the spotlight inevitably on the enduring story of Annalise Murphy’s performance not just this week with seven race wins or last year’s Olympic Games close-call, the efforts by the other Irish sailors at the Laser European Championships tends to be over-shadowed.

Nevertheless, were it not for the possibility of a home title win, the story of the week would certianly be on the Laser Radial Men’s event which has an equally large turn-out of 90-boats as it it used as a stepping-stone class to the full-rig Men’s Laser Standard event.

Similarly with three races to sail today, Finn Lynch of the National Yacht Club has a real chance of maintaining a podium result from his current second overall standing in the Gold fleet which is being led by Australia’s Tristan Brown.

With the class world title up for grabs, the sailor from Down Under could yet lift this but the Irish sailor is currently leading the European title event in second but will be under pressure today from Poland’s Marcin Rudawski who trails him by just two points but has a higher discard to drop once the 10 race is sailed today and another discard comes into force.

European title
To win the European title, Lynch will have to beat the Pole in every race plus stay in the top few places to avoid another sailor coming from behind though the points spread means Spain’s Juan Kevin Cabrera Gonzalez is the only other boat closest.

Ironically, Lynch has steadily worked his way up the Gold fleet since the qualifying rounds, replacing another Irish sailor in the top three as Baltimore Sailing Club’s Fionn Lyden slipped back down the leaderboard to eighth place.

The west Cork sailor fared poorly yesterday with a back of fleet 38th place which used his discard; today’s performance could yet bring his overall standing back up the top 10 for a very acceptable result though he will have to overtake Ireland’s Robbie Gilmore in seventh overall first.

Game Changers: The Irish brother who became the Godfather of Kenyan running 06:16
Contrasting sanctions for James Cronin and Robert Powell difficult to reconcile 06:00
GAA yet to receive any complaints from clubs concerning county teams’ activity 06:00
Greenwood and Pogba supply finesse as Man United deepen Villa’s woes 22:49
Masters plan for November shows Augusta National is out of touch 22:30
Here is your handy guide to sport on television this week