Steve Smith - the best at his best, defying the odds

In a game that hinges on getting players out, what happens when you cannot get one out? 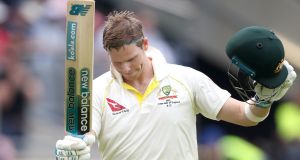 We are witnessing something very special with Australia’s Steve Smith. Photograph: PA

Steve Smith is ruining Test cricket. Like a maverick cop forced off active duty, he has been back only five minutes but is already laying the town to waste. Or at least this is the perception in some parts of Britain.

Some objections come from the internet eggs that spawn around comment threads, decrying him as a cheat who should never be allowed near a cricket field again – you know, like all the other ball-tamperers who were banned for life rather than being feted as greats of the game with commentary contracts and hall of fame places.

Another interpretation is that cricket is now futile because Smith is too good. He was out of the game a year and a half, confined to desk duties by some chief who did not appreciate his way of getting results. But the instant he got back on those mean streets, he started cleaning them up again. Two centuries from two attempts, and the Ashes may as well be surrendered now.

It is true that Smith can become impossible to bowl to and never more so than against England: five centuries in his past six Ashes Tests, averaging 139. That is a whole lot of stepping across the stumps to knock a single to midwicket. At times Smith seems to form a wall: a bat that always middles the ball, two pads lined up behind it that are never struck. In a game that hinges on getting players out, what happens when you cannot get one out?

Of course none of this is actually accurate. Anyone can and does and will get out. Every batsman fails more often than not. Smith might get a pair this week at Lord’s. What he has done is worked out a system against an even-paced right-arm seam attack while neutering England’s principal off-spinner.

As Smith explained in 2017, he used to take guard on middle stump and not have a preliminary movement. This meant he could be drawn into edges outside off stump. One could see it at Trent Bridge 2013: stock-still as the ball was delivered, bat high in the backlift, he drove hard for an important 50 before Jimmy Anderson found some outswing and a nick.

To combat this, Smith eventually took guard on leg stump and stepped all the way across to off. That can make players vulnerable to lbw but Smith is so strong off his legs that it opens up that scoring area while shrinking the channel. “It’s a big movement,” he explained, “but for me it’s about trying to minimise the ways that you get out. If guys get me out lbw, I say well played, congratulations but, if I nick one off, that’s when I get upset at myself.”

The best way to get Smith is still the outside edge. That is where any player is vulnerable. The bowlers who keep feeding the line on his pads are the ones he keeps gorging on. Anderson equally tried to keep this perspective on the BBC’s Tailenders podcast. “He’s a great player but he is a human being. There are ways of getting him out, whether it’s not trying all these fancy plans – just sticking to your basics a bit longer.”

Anderson has bowled to the greats of his era and has got them all out at one time or another. Perhaps it is more possible for him to avoid playing the reputation rather than the player. One example is the sudden feverish interest in left-arm spin, with Smith averaging 37 against it as opposed to 51 or better against right-arm spin or pace with either arm. But the case has definitely been overstated.

Rangana Herath got Smith five times in Sri Lanka in 2016 but that was Herath at his absolute best, bowling half the team’s overs and taking 27 wickets on spinning tracks. Ravindra Jadeja had him four times but likewise bowled half the overs when Australia visited in 2017. Keshav Maharaj and Dean Elgar got him four times between them in 2018 but South Africa had no right-arm spinner. If one mostly faces left-arm bowling, there is no significance getting out to it.

In terms of right-arm spin, Smith’s stronger record includes any number of part-timers and bowlers such as Moeen Ali, whom he has climbed on top of. Moeen has dismissed Smith three times in 18 innings while giving away a truckload of runs. What Smith has done is never let him settle.

England will bring in the left-armer Jack Leach for Moeen at Lord’s, though that is as much to do with Moeen’s lack of form. Three days out Smith was facing local left-armers. “No margin for error with your length and you have to have your pace right up there,” was the observation from one of the net bowlers. Any false shots? A shake of the head. “Just to bowl a dot to Steve Smith is an achievement.”

During the spell Smith kept complimenting deliveries on flight or shape. He kept touching each part of his body, as he does in the middle. He stayed until near the end, as did David Warner. This was an optional session. Of course they were there. None of this is coincidental.

Steve Smith is not destroying Test cricket. He entertained it, then he bruised it, now he is gracing it again – the best at his best, defying the odds. Ethics and ramifications can be argued for decades. But it will not take that long to appreciate that in these brief years we have been witnessing something very special.

1 Gordon D’Arcy: Losing such a big game shines a very harsh light on certain players
2 How Dundalk’s opponents Sheriff started on wrong side of the law
3 Luis Suarez leaves Barcelona for Atletico Madrid in €6m deal
4 Awarding of 2023 Rugby World Cup to France part of Laporte investigation
5 The Offload: Saracens prove Pro14 is not fit for purpose
Real news has value SUBSCRIBE