Lightning start has brought the rewards for Leinster

Template for success is there for other sides to follow 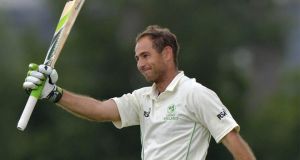 Leinster Lightning’s John Anderson has been the top scorer in the interprovincials with 376 runs. Photograph: Rowland White/Inpho/Presseye

Leinster Lightning’s two-day victory over the North West Warriors to secure the RSA Interprovincial Championship title at Bready during the week yet again showed their dominance in the first year of the reintroduction of the competition.

With the Twenty20 trophy also in the bag, Leinster will travel to Strabane on September 21st knowing a victory over a Warriors side without a win in all three formats will secure the 50-over crown to complete the treble.

Earlier in the summer this column postulated that Leinster’s dominance in the competition was not necessarily a bad thing, setting a bar for both the Warriors and Northern Knights to follow.

Indeed, both on the field and off it, Leinster have looked the most professional of the three sides and have set a template of success for the others to attain as the competition builds towards the eventual goal of achieving first-class status.

And with a possible inter-regional competition involving Scottish and Dutch sides in the pipeline, the three Irish sides have every motivation to keep rising their standards in coming summers.

Leinster’s success been helped by having a squad heavily laded with full internationals and a strong league structure that sees two sides competing in the upcoming RSA Irish Senior Cup final, with one of those, Clontarf, being a Division Two side.

In total 66 players have taken part across the three sides so far this summer, with Ireland coach Phil Simmons and his national selectors getting the chance to see players who often dominate at club level tested in a higher level of competition.

Top of lists
A look at the statistics shows, as you would expect, Leinster players at the top of both the batting and bowling lists, with John Anderson’s 376 runs coming at an average of over 60, with four half-centuries in eight innings leading the way for batsmen.

Max Sorensen leads the bowlers with 27 wickets at an average of just under 16, six clear of his Leinster team-mate Eddie Richardson, who has also averaged over 50 with the bat and has strong claims on the player of the tournament award to date.

If one of the key roles of the Interprovincials is to ready club players for the step-up to international level, well then Richardson has taken most advantage this summer, while internationals Sorensen and Anderson have backed up just why they have already received the call.

Looking further down the lists, it’s interesting to point out some other fine individual performances, even amongst a Warriors side that have struggled all summer in the interprovincials.

Donemana’s Andy McBrine captained the side in the defeat to Leinster this week and at just 20 years of age looks set to enjoy plenty of international exposure in the years to come. A son of former international Junior McBrine, the left-handed batsman and off-spin bowler will also play a big part in the Warriors’ development over the coming years.

Big weekend
YMCA face in to the biggest weekend in their recent history, with a home game against fellow Leinster league title hopefuls Merrion tomorrow followed by the refixed Leinster Senior Cup final against Pembroke on Sunday at Claremont Road.

YM suffered a shock 124-run defeat away to Leinster last weekend, a result that allowed Merrion take a slim two-point lead at the top of the table after their four-wicket victory over Railway Union at Park Avenue.

The Hills, who host Leinster tomorrow, are also in the mix for league honours and have the advantage of taking on YMCA at Milverton on the last Saturday in August before finishing up with an away game against a Phoenix side that are already relegated.

Without any cup commitments – Merrion play the All-Ireland decider against Clontarf on Saturday week – The Hills certainly have the easiest of the run-ins of the three teams in contention for the Division One title in what looks a fascinating end to the season in Leinster.