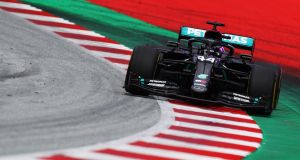 Lewis Hamilton on the way to winning the Styrian Grand Prix at the Red Bull Ring in Spielberg, Austria. Photograph: Mark Thompson/Getty Images

Lewis Hamilton won the Styrian Grand Prix with a flawless piece of controlled driving from pole to flag for Mercedes. His team-mate Valtteri Bottas finished second, with Red Bull’s Max Verstappen in third at the Red Bull Ring.

Ferrari, however, suffered an absolute shocker with both cars retiring after they collided on the first lap. Charles Leclerc later apologised to his team-mate Sebastian Vettel for the incident, saying he had “let the team down”.

With last week’s Austrian GP also run at the Red Bull Ring, this was the first time F1 had held two races at the same circuit in the same season. After finishing in fourth place here last week, Hamilton owned the race this time round in an ominously routine piece of dominance from Hamilton and Mercedes. The British driver led from the off and was not threatened as he dictated the race from the front.

After two rounds of a season likely to run to 15 races, Bottas still leads the drivers’ championship with 43 points, in front of Hamilton on 37 points. McLaren’s Carlos Sainz took the extra point for fastest lap.

Before the race there was another anti-racism gesture on the grid, with drivers wearing “End Racism” T-shirts as 12 drivers, including Hamilton, took a knee. The British driver also raised a single clenched first on the podium after winning the race.

Hamilton’s 85th career win, his second in Austria, completes a remarkable weekend for the British driver. His car had been off the pace in practice, with Mercedes unsure as to why he was lacking balance and grip. Having been beaten by Bottas to pole last week his qualifying was magnificent in the wet, a class apart form the rest of the field. He backed it up with another performance that did not allow his rivals a look-in.

With Mercedes also dominant last weekend, it seems the team have lost none of their momentum in the long break enforced by the coronavirus crisis. Attempting to match Michael Schumacher’s record of seven titles this season, Hamilton is now also within just six race wins of Schumacher’s tally of 91.

Mercedes are also looking to score a record-breaking seventh consecutive constructors’ championship. With two wins from two races and both drivers in fine fettle, their pursuit of making history is firmly on course – especially with Ferrari already lagging so far behind. Should Mercedes repeat this performance at next week’s race in Hungary, they might expect to enjoy even more of an advantage when racing moves to Silverstone, Spa and Monza.

Hamilton held his lead cleanly from the off but behind him Ferrari’s woeful season took another blow. After a poor qualifying left their drivers 10th and 14th, the two Ferraris were squeezed together on the opening lap as Leclerc was overambitious in diving up the inside through turn three. His vehicle was flicked in the air on the kerbs and struck Vettel, whose car took major damage to its rear wing.

The debris caused the safety car to be deployed; Vettel retired immediately, with Leclerc following suit several laps later. It was a disastrous double failure to finish when the team desperately needed track time to assess the aero upgrades they had brought to the race.

Vettel was blameless and not happy. “I wasn’t expecting Charles to try something,” he said. “It is a big pity and something we should avoid. I don’t think there was space, that’s why we collided.” Leclerc apologised and held his hands up. “I’m just disappointed in myself, I’ve let the team down,” he said.

Racing resumed on lap four and Hamilton immediately opened up a gap on Verstappen in second, while Bottas and Alexander Albon swiftly made up places into third and fourth respectively. Hamilton had cleared over two seconds on Verstappen by lap 12, with over six seconds on Bottas and the leading three were in a race of their own with a third of the race gone.

On pace, Mercedes had a solid advantage and Red Bull pitted Verstappen first on lap 25, where he took the medium tyres. Mercedes covered off the stop two laps later, Hamilton coming in to also take the mediums. Bottas stayed out, going long on the soft rubber until pitting on lap 34. With Hamilton back leading, he had a full five seconds on Verstappen: an advantage he would not relinquish.

Mercedes had serious concerns last week at gearbox sensor problems caused by the kerbs but having addressed them in the interim, they were running apparently trouble-free for the full 71 laps. Bottas set off chasing down Verstappen and caught him on lap 66, but the Dutchman defended with great skill. The Red Bull driver could not match Bottas’s pace, having sustained some front wing damage. Bottas overtook a lap later and out front Hamilton remained unperturbed to the finish.

Albon was in fourth for Red Bull in front of McLaren’s Lando Norris, who did brilliantly on the final lap, making up two places. The Racing Point of Sergio Pérez finished sixth from 17th on the grid, while his team-mate Lance Stroll was seventh. Daniel Ricciardo was eighth for Renault, with McLaren’s Sainz ninth and Daniil Kvyat rounding out the top 10 for AlphaTauri. – Guardian