Irish sailor Damian Foxall among the crew of American entry 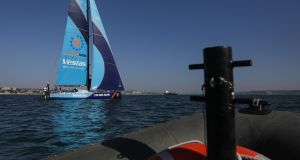 Enright’s crew edged into the lead in the first 24 hours of the leg and steadily built a 34 nautical-mile advantage that was to prove critical by the finish. Light winds just off the Lisbon coast slowed the leaders while the fleet chasing astern started to compress.

However, Vestas held the advantage and won with 10 miles to spare over Spanish race favourite Mapfre skippered by Xabi Fernandez.

Historically, the leg one winner is often the overall victor 10 months later.

However, leg one is usually much longer and next weekend’s second leg from Lisbon to Cape Town sailed over 6,500 nautical miles may yet test the tradition.

Meanwhile, Ireland’s Annalise Murphy racing with Dee Caffari’s Turn the Tide On Plastic was battling to avoid seventh and last place at nightfall.