Are sports awards that are just for women the answer? 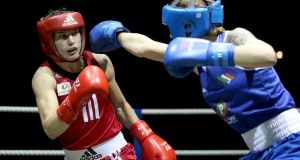 What on earth are we all going to do when Katie Taylor hangs up her gloves?

Last year Taylor was crowned The Irish Times/ Sports Council’s Sportswoman of the Year – again. Of course she deserved it: 2014 saw her winning a record- breaking sixth European title and her fifth consecutive world title at Jeju, South Korea. Kerpow!

This year, Taylor won her 10th monthly Sportswoman award in June after she closed out her 18th consecutive title at the European Games in Baku. So it’s seconds out to find out which Katie the judges thought did best (Taylor or Walsh or Corkery or Briggs or . . . or . . . the debate rages on) for the overall award in 2015.

When RTÉ began its Sports Person of the Year awards in 1985, it looked like the same old story – until Sonia O’Sullivan rounded the bend and kept her eyes on the prize to do the triple in 1993, 1994 and 1995. She bounced back to the top in 1998 after a brief detour to honour dubious swimmer Michelle Smith and irreproachable snooker star Ken Doherty in 1997.

It took 11 years for Taylor to join O’Sullivan at the top table. But – hello boys! – there was no keeping that door closed. Taylor was coming in.

Things are pretty slippery for women on the other side of the Irish Sea as well. Actually, this year the BBC awards are heading to Belfast on December 20th, so the Irish Sea may be less of a divide. But the gender split remains.

So. How is the great sporting gender gap looking? Not that brilliant. There still are not enough women reaching the pinnacle of sporting recognition whatever they do.

In the past 60 years, there have been only 13-and-a-half female BBC Sports Personality of the Year winners. (The half is Jayne Torvill of ice- dancing pair Torvill and Dean). The winner has been a male for the past eight years.

Jessica Ennis-Hill has been a runner-up three times. This year she has won a world athletics championships heptathlon title and had a baby, but once again may not make it beyond the shortlist.

Odds on an Ennis-Hill win have lengthened after Andy Murray brought home the Davis Cup for Britain for the first time in 79 years and Tyson Fury took the World Heavyweight title off Wladimir Klitschko. Neither, to our knowledge, gave birth as well.

Now, the BBC’s director of sport is a woman (Barbara Slater), and she did sit on the SPOTY selection panel. So hasn’t everything changed utterly?

Things may have improved, but sport continues to sail close to the edge of the world’s most unlevel playing field. Anyone watching the machinations in Fifa may agree.

Some people say that things are getting much easier for sportswomen. Some of them oppose quotas in politics and are happy to sit back for centuries while women play catch-up – if they ever do.

Are sports awards that are just for women the answer? What does Katie Taylor think? “It is wonderful to have an award like this as it recognises Irish sportswomen and the amazing achievements that have brought us all here today,” she said last year.

Are you going to argue with Katie? I thought not.