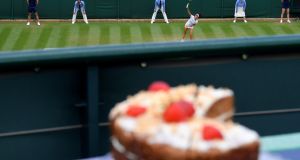 The idea of a slimmed down version of Wimbledon with smaller crowds were ruled out. Photograph: Toby Melville/Reuters

Hung juries have taken less time than the All England Club to convict a villain as bang to rights as coronavirus. When the club’s board emerged from three days and several hours of teleconference pondering on Wednesday afternoon to confirm that the 134th Wimbledon championships would, indeed, be cancelled, because the killer is still stalking not just the pleasant environs of London SW19 but the entire globe, the question was: what took you so long?

There was a carefully worded statement of the obvious. When Ian Hewitt, the new chairman, said: “This is a decision that we have not taken lightly”, it had the merit of authenticity about it. Wimbledon had self-isolated in line with UK government guidelines of saying as little as possible in difficult circumstances.

They came to the only proper conclusion, of course: the health, safety and lives of players, staff and spectators so obviously override mere sport, mere tennis, mere Wimbledon. How could that ever have been in doubt?

The AELTC, generally, is pleasingly modern in its thinking and can hardly have been ignorant of the facts swamping every news bulletin. The All England Club had only to look across the pond for a light in the window.

On Tuesday the USTA announced it was offering the grounds and facilities of Flushing Meadows, perhaps the scene of the US Open in August, for use as a makeshift hospital. It was impossible to ignore the grip that coronavirus was taking on New York and America. Urgency struck hard. Wimbledon, too, might yet serve as an overspill hospital.

Earlier, Patrick McEnroe, who reached the fourth round of the doubles there in 1991 with his brother, John, only a few miles from where they grew up, was confirmed as a carrier on the very day deaths in their city surged passed 1,000. Estimates of the ultimate death toll across the United States range from 100,000 to 250,000. Uncertainty and reality collided with a bang for Americans and American tennis.

The Wimbledon management could not avoid these and other numbers that countermanded lesser considerations of commercial imperatives and the integrity of the institution. On Tuesday, Covid-19 claimed more lives in the UK, France and Spain than in any other single day of the pandemic. By the time the board emerged with a statement at 4pm, hundreds more had died. There will be hundreds again, probably thousands, by the end of this month, the latest that Wimbledon could leave it before embarking on eight weeks of preparation for the tournament.

Dismissed was the idea of a slimmed down version of the championships, with smaller crowds. They were aware, too, of the “optics”, the outside impression of an institution moving with glacial caution only to swerve out of the way of one iceberg and into another one.

The rye grass that looks so lush across the clipped lawns of the All England Club is cut to 13mm, and that requires up to a month of dry weather, after 15 months of seeding. More numbers. The window was small. The temptation to wait weakened by the day and, in the end, the hour.

What would the players think? Annabel Croft reckoned cancelling Wimbledon would be “a nightmare” for the 38-year-old legends, Roger Federer and Serena Williams, who might never get the chance to add to their combined total of 15 championships. She might be right.

At the other end of the food chain, life is different. When Sofia Shapatava, the world No 375, launched a petition for financial support during the game’s suspension, she attracted 650 signatures in a day, and minor opprobrium from those outside the game who thought she was guilty of special pleading.

The 31-year-old Georgian, who has earned $354,725 in 16 years, outlined life without tennis in a conversation with a like-minded battler, the retired Australian Sam Groth. Shapatava told Groth on his radio programme, the First Serve: “Some player doesn’t sell a commercial, but another cannot pay rent. I know many, many players [like that]. It is not a problem that has just appeared right now, or will disappear tomorrow. It hits everyone very hard.

“The gap in prizemoney in higher tournaments and lower tournaments is incredible. When you go in a Grand Slam, you get around fifty grand [in US dollars]. You lose first round in quallies in a ‘25 [a low level tournament], after taxes you are looking at $9, maybe $15, which is not even a meal. Many players cannot pay for their everyday life. Not everyone has someone who can help them out.”

It is hard for players such as Shapatava – the vast majority, in other words – to think beyond a cheap flight to Kazakhstan, the budget hotel or shared room, the hazard of qualification, gambling on entry to the main draw, where early defeat usually beckons. It is the only life they know. But they must know, too, that they share a boat with Federer, Williams and the solid citizens of the All England Club right now, not to mention those who will be shipped into temporary beds at Flushing Meadows next week.

A couple of emails drop. The first is from the Tennis Integrity Unit, to say that the unranked British player Patrick Keane has been banned for six months and fined $500 for “betting on tennis” offences. You’ve got to admire his timing. Plainly, his earnings were meagre enough to induce folly.

The second is from Thierry Ascone, Jo-Wilfried Tsonga’s coach. His people wonder if there would be any interest in “exploring esports” with him. Maybe not. But that is what we are reduced to for awhile: virtual sport, pretend tennis, waiting for the world we knew to realign. – Guardian