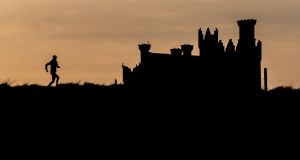 Andrew Coscoran trains on the cliffs in front of Bremore Castle in Balgriggan. Photograph: Morgan Treacy/Inpho

Olympic year, and even if just a few months old Andrew Coscoran was already having the times of his life. Running them, that is, a series of indoor bests putting him on track to qualify for Tokyo come high July 2020.

Until just before lunchtime last Tuesday, when Tokyo 2020 suddenly became another year away, stopping Coscoran and all Olympic hopefuls like him in their tracks. Like others he was halfway resigned to it already, only that didn’t lessen the blow. While many people have already lost their jobs or had their education deferred in the face of Covid-19, he’d already given up both in order to give himself the best chance of qualifying for Tokyo, and for good reason.

Momentum, as every distance runner will tell you, is everything, and he was rolling in it. On the opening Sunday in March, Coscoran won his first national title over 1,500m at the Irish Indoors, the 23-year-old from north Dublin clocking 3:41.36, a new championship record after 14 years. In February, he ran the fastest Irish indoor mile in six years with his 3:56.85 in Boston, followed that up with a 3:37.98 for 1,500m, before clocking another 3:57.83 at the famed Wanamaker Mile.

By then, the World Indoors in Nanjing, China had already been postponed into 2021, one of the first events too fall victim to the virus, and even with the first whiff of spring in the air it was clear that training towards Tokyo was becoming a problem.

“Up until the week before last, some of us were still trying to meet up, a few of us running in the Phoenix Park,” says Corcoran, who has in part credited his 2020 breakthrough to the group training philosophy of the Dublin Track Club (DTC), set up by his coach Feidhlim Kelly. “We were already starting to get a few looks from some people passing by. Right away we didn’t want to be upsetting anyone, endangering anyone, so split up into one or two.

“Then it got more serious again, and now we’re all pretty much training alone. So it was a kind of gradual thing, but no more group training for now, obviously. Runners spend a lot of time on their own anyway, but it’s the training group that I’m really missing right now. There’s no socialising, not even a coffee with your mate, you miss that too.”

The Government’s latest measure to contain Covid-19, restricting all exercise to within a 2km radius of your home, presented another challenge, Coscoran limited to the shorter running loops from the family home in Balgriggan, taking in the nearby harbour and cliffs, measuring his runs with Strava, the social-fitness network that uses GPS data to compare times and distance.

“Just being able to get out for that run, for me, is huge. As long as we have roads and hills to run on we’ll be okay. Some of the training quality has been lost, definitely. I also managed to get my hands on an old treadmill, from my grandparents. Although trying to run some of your 100 miles a week indoors on a treadmill does take a little extra motivation.”

At the end of last year, he left his job at the Sport Ireland Campus and deferred his final semester at DCU, studying Education and Training, in order to prepare full-time for Tokyo, now postponed into 2021, though no later than that summer. Coscoran wasn’t yet getting any elite athlete funding: “The plan was go full-time, full target, for the Olympics. We also had a European Athletics Championships in Paris, in August, which are probably gone now too. So running, to be honest, is really the only thing going on in my life right now. That was a big jump already, to go all in, packing in the job and college.

“But I’ve seen how it’s impacted on others. My regular physio Declan Monaghan has had to close down his facility in Blanchardstown, is massively impacted, shut down for six weeks, trying to pay rent. The Institute isn’t closed yet, for athletes still trying to qualify for Tokyo, so we still have that for now.”

Coscoran’s indoor times put him within reach of the ranking quota in the 1,500m, but it seemed there was no way of improving on that before the original July 24th opening: “I needed to race, 100 per cent. But I think a trait of every good athlete is being able to re-evaluate, make the most of each situation. If my motivation was broken by anything I wouldn’t consider myself a good athlete. Anything I can grasp, I’ll find motivation.”

He’s already decided on one, again using Strava, as his next opponent, once the 2km limit is lifted: “The Dublin Track Club have a 5km hill run around Howth, the segment mapped on Strava, and Seán Tobin is the only member of the group to run it in under 16 minutes. I’ve got my record attempt pencilled in later in April, hopefully.”

There’s another small silver lining: “Yep, back living with my parents, keeping our distance obviously, six of us at home now. My brother is back up from Galway, his college is shut, was working in a hotel, that’s gone too. So it’s not lonely at home. If anything we’re gaining a bit more family time together. But a lot of uncertainty, yeah, is there going to be money coming into the house to keep it all going?

“But for the Olympics, 2021 definitely makes more sense. It was a great start to the season, phenomenal, and it would have been great to keep that momentum going. But I’m only 23, I’m still thinking I’ve all the time in the world. I’m thinking two more Olympics, not just Tokyo.”

1 Gerry Thornley: Home and away Six Nations could be its ruination
2 Aviva 10-year ticket holders seek clarity over payment
3 Darcy says enforced break could end up being a positive for Dublin
4 Coming fourth in the Olympics didn’t change this fearless quartet, time did
5 Sideline Cut: Vignette shows why Bird is the true shark in The Last Dance
Real news has value SUBSCRIBE