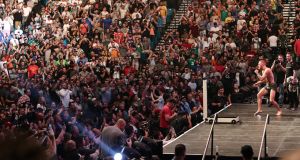 Conor McGregor entertains fans during the UFC 196 weigh-ins at the MGM Grand in Las Vegas, prior to his loss to Nate Diaz. Photograph: Rey Del Rio/Zuffa LLC/via Getty Images

Donald Trump says that the art of the deal is all about making the other guy think you’re ready to walk away. The current dispute between Conor McGregor and the UFC president, Dana White, is a Trumpian standoff between two guys who are both trying to pretend the other guy needs it more.

It all started on Tuesday evening, when, out of the blue, McGregor tweeted “I have decided to retire young. Thanks for the cheese. Catch ya’s later.” Some 170,000 retweets quickly made it the biggest tweet by any athlete in the world this year.

White responded with a round of media interviews in which he explained that McGregor had refused to fulfil his promotional obligations for UFC 200, the July event in which he was scheduled to fight Nate Diaz, and that the organisation had therefore decided to pull him from the card.

“Obviously Conor made a decision and made a choice to not want to fight on this card,” he told Fox Sports. “And that’s how he gets paid. So that’s on him, man. It’s not on me. The show will go on . . .”

Asked whether he believed McGregor had really retired, White called his bluff. He pointed out that retirement would mean two things: first, McGregor would have to give up his featherweight belt, and second, any future return to the sport would be delayed by the need to comply with anti-doping protocols.

On Thursday, McGregor posted a Facebook status update giving his side of the story. Perhaps surprisingly, his version of events did not differ much from White’s. He didn’t want to leave his training camp in Iceland to fly to Las Vegas and on to California and New York to participate in what he saw as a series of pointless interviews and commercials.

He finished by saying: “For the record also . . . I AM NOT RETIRED.” So he had already retreated from his original position, which could be seen as White 1 McGregor 0.

Yet if there was something faintly ridiculous about his rapid U-turn, much of what McGregor said rang true, and for that reason he has received a largely sympathetic hearing.

That ‘yet’ obviously hints at the prospect that if he did get paid, maybe he could see his way to doing some more promotion. He’s always been willing to be paid off in the past.

Last July, in the post-fight press conference following his victory over Chad Mendes, he explained his attitude to the constant draining media obligations: “I thought, f**k this. Next time I’m not doing all of this. And then I get handed the cheque. And I’m like, well alright then.”

McGregor did seem exhausted at the end of that week, and you could understand why. The unrelated, but simultaneous, challenges of fighting and promoting had put him under intense physical and mental strain.

It was plain that he needed a break and time to recover. Instead, the UFC pitched him straight into recording for the next series of The Ultimate Fighter, their promotional TV show. This is not an organisation that worries about athlete burnout.

When Ronda Rousey was unexpectedly knocked out by Holly Holm in November, McGregor remarked that her performance might have been affected by excessive media commitments. For his own part, he was still claiming that he accepted the promotional work as part of ‘the fight game’ – that every martial artist had to master certain disciplines: boxing, grappling, kickboxing, media.

In the build-up to his fight against Jose Aldo in December, he compared himself to Rocky in Rocky III. Rocky, by then a successful champion, lazes around in chunky-knit sweaters while his hungry young rival, Clubber Lang, trains like a beast; when they meet in the ring it doesn’t go too well for Rocky. At the time, McGregor was insisting that he could combine the lavish lifestyle of Rocky with the raw hunger of Clubber Lang. He managed it against Aldo but losing to Diaz last month seems to have prompted a rethink. “I have become lost in the game of promotion and forgot about the art of fighting,” he wrote on Thursday. “I’m left looking down the barrel of a lens, staring defeat in the face, thinking of nothing but my incorrect fight preparation. And the many distractions that led to this . . . It is time to go back and live the life that got me this life.

“I flew an entire team to Portugal and to Iceland to make my adjustments in preparation and fix my errors I made with the weight and the cardio prep. With the right adjustments and the right focus, I will finish what I started in that last fight.”

This was new territory for McGregor. Not only was he admitting that he had made mistakes, he was also conceding that he was worried about the consequences if he didn’t get it right next time.

There had been reason to fear that he was incapable of this kind of honest self-criticism, because he’s often talked about his faith in the Law of Attraction, a new age philosophy which teaches that the key to success is unwavering belief.

When belief, in and of itself, is the only thing that counts, then any form of questioning or doubt is rejected as self-defeating negativity. But when you refuse to question and to doubt, you deny yourself the ability to think.

But even though they no longer like each other, they can still help each other to make money, which is why the current stand-off seems most likely to be resolved with McGregor’s reinstatement on the card for UFC 200. In the long-run, there’s nothing like mutual economic self-interest to preserve the peace.