Katie Taylor finds all that glitters is not gold against Serrano 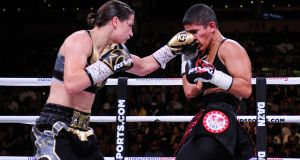 It had all the makings of a box office hit. A debut fight on the exciting new DAZN subscription-only boxing channel, a substantial and vocal Irish contingent among the near 7,000 fans and a “notorious” Conor McGregor at ringside to boot.

Yet as the clock approached midnight in Boston’s TD Garden, the contest had deteriorated into a damp squib as Katie Taylor cruised past Puerto Ricco’s Cindy Serrano to retain her WBA and IBF world titles.

That was no fault of the Bray native. Draped from head to toe in black and gold, the 32-year-old entered the arena like a gladiator ready for battle – it was just a shame her opponent brought a shield and no sword.

It takes two to tango and 36-year-old Serrano seemed content on playing defence for the entire 10 rounds, anathema to the precocious Taylor.

“I really expected this to be my toughest fight to date,” remarked a bitterly disappointed Taylor afterwards who had hoped to have at least been tested.

A solid right hand at the beginning of the second round was the only highlight of a tactical opening salvo. Taylor upped the ante in round three as Serrano found herself on the ropes twice. A powerful left uppercut from Taylor closed out round five and it was clear Serrano would be contributing little to the clash.

By round seven the raucous Irish roars and chants of “ole ole” had quickly dissipated, an eerily, almost awkward silence filling the stadium.

So frustrated was the reigning double champion she uncharacteristically dropped her hands down around her back, taunting and goading Serrano to attempt something remotely offensive. Serrano appeared hesitant at first but then reluctantly caught Taylor with a free hit to the jaw.

“I did actually get caught with a jab when I did do that,” Taylor laughed. “I was mortified! But when someone is so defensive like that, it’s important to just relax and enjoy it” – before unleashing a barrage of blows to Serrano.

One could not help but think about the potential clash of Taylor and Serrano’s younger sister Amanda as the clock slowly ticked down. Even Serrano’s coach and husband Jordan Maldonado it appears, who alluded to it rather disparagingly.

Comments like “Don’t worry Amanda is going to knock you out next time”, were blasted at Taylor and her camp during and after (security briefly had to step in) the fight.

“I heard that throughout the whole fight,” said Taylor. “He was saying terrible things – that was his wife in the ring. He was shouting in, ‘You picked the weaker Serrano!’ That’s a terrible thing to say. You should at least give your wife some encouragement! That’s ridiculous.”

A couple of thunderous right hands in round nine were replicated at the end of round 10 as all three judges scored the fight 100-90 for Taylor’s 11th professional win.

Asked if a nine-week turnaround posed a problem for the now Connecticut-based fighter, manager Brian Peters remarked: “Katie could have fought Cindy at 6 and Amanda at 9 o’clock tonight, the way they were carrying on with all their ol’ piss talk”. Which kind of tells you all you needed to know about Saturday night’s “fight”.