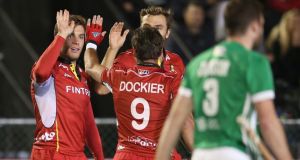 Ireland’s 15-game unbeaten run came to an abrupt end in Johannesburg as the pumped Red Lions of Belgium showed their elevated class, running up a 6-2 scoreline in their second Hockey World League group game.

It left coach Craig Fulton lamenting the concession of “soft corners” as Tom Boon rattled home a trio of drag-flicks as the Olympic silver medallists went on a rampage in the second and third quarters.

“Belgium are a good team and have got a lot of power in a lot of areas,” Fulton conceded afterwards. “Their corners are a strength so when you give away soft ones, it does hurt you. We had a good few phases but couldn’t sustain it for longer periods.”

In one of those good phases, Stu Loughrey and Jeremy Duncan combined beautifully down the right wing to set up Stephen Cole to swipe in his first international goal.

It gave Ireland a 1-0 lead after the first quarter but Belgium had already shown plenty of signs of menace and their consistent high press saw the green machine’s defence creak.

Simon Gougnard smashed in the equaliser on the 17 minute mark after a pitch length move. Cedric Charlier tapped in the second following a stunning turnover with Thomas Briels the instigator. Boon’s first corner strike made it 3-1 at half-time with the game looking already to be running away from Ireland.

David Harte kept out multiple chances, including one with his face from Charlier’s rasping shot. His twin Conor screamed for play to be stopped for a head injury as the goalkeeper appeared to wobble but play was waved on and another penalty corner ensued.

The keeper looked shaken from there on and was powerless to stop a Loick Luypaert penalty stroke and a pair of Boon flicks.

Alan Sothern pulled one back late on with a peach of a strike on his backhand but thoughts were already quickly turning to Thursday’s date with Egypt.

A win will put Ireland through to the quarter-finals with a game to spare and, despite the Belgian loss, they will fancy their chances against a side that lost 10-0 to Belgium and 5-0 to Germany.

On Wednesday, it’s the women’s turn as they face Poland where a win will see Graham Shaw’s side advance to the quarter-finals.