Novak Djokovic growls and swipes at holes in Wimbledon ground 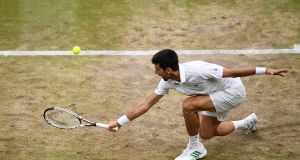 Serbia’s Novak Djokovic in action during his fourth round match against France’s Adrian Mannarino. Photograph: Reuters

On Tuesday Novak Djokovic became the touchstone for a selection of grievances.

Andre Agassi, a onetime punk warrior around the All England Club and an affront to the members, watched on willing the old fire onto the pupil and pleased there was the fastidious economy from the Serb, the old game of precision and movement.

Relaxed with a return to form, the medical trainer arriving to hyper extend Djokovic’s shoulder, the divots appearing on Centre Court, the maltreatment of ball boys and the unfairness of holding over his game from Monday because of “security reasons” took the world number four through a miscellany of topics.

Now 30-years-old and the holder of venerable status, Djokovic gamely set out to filter the tennis woes through the prism of Djokovic logic.

His match? Well that faltered only in that opponent Adrian Mannarino took him to a tiebreak in the second set, forcing Djokovic to hit top gear, which at times produced some of the most entertaining rallies of the day.

Mannarino threatened only in short bursts and he stretched the former winner on points. But in sets and game it was Djokovic, who kept a tight grip on his roll out of glory.

A 6-2 first set in 37 minutes forced the French opponent to rethink. Some extravagant drop shots mixed it up and with Djokovic unable to break the 51 ranked player’s serve, it went to a tiebreak falling his way 7-6 (5).

The question then was how many times at Wimbledon has the three time champion lost a match from two sets up against a player outside the top 50 and who has never been to a Grand Slam quarterfinal. The answer was not very often, if ever.

He growled and swiped at the holes in the ground and leading 3-2 in the third set summoned the trainer twice for some ultra stretching on his right shoulder, the second time requiring a medical time out.

“As you all know grass is the most demanding and complex of surfaces for maintenance. The more you play on it the worse it actually gets,” he explained.

“Yeah, many players, I mean I am not the only one, have been complaining a little bit about this condition of the court. The fact is that, you know, the court is not in great condition.”

With that a team of ground staff broke into a swearing storm in the sheds and club members swooned in the debenture lounge. Hell to pay somewhere for some subcommittee.

The final set went to 44 minutes before Djokovic closed it 6-4 and not wanting the issue to lay, brought the umpire down to ground level and on to the court to point out the most egregious of holes on the centre serving line.

Former champion Martina Navratilova was later to say it looked like someone hit a five iron on the surface and took a proper divot.

“The chair umpire at the end of the match asked me about the hole. He wanted me to show it to him so I showed it to him. His reaction wasn’t that great,” said Djokovic mischievously smiling.

It is always thus. ‘Champion polishes off low ranked player’ rarely makes a headline. But holding over his match to Tuesday because of a lack of a fifth set tiebreak in Nadal’s match against Muller and Djokovic was almost wagging his tail and spinning around in circles.

“Because Isner and Mahut made history with an 11 hour match once? Is that a reason we’re keeping it,” he asked of Wimbledon’s eccentric fifth set rule where there is no tiebreak.

“Yeah it was great drama. But that player has to go out tomorrow. It is for a spectator,” he added momentarily forgetting what industry it is where he works. “But for a player to play a five, six-hour match then come back the next day and perform, it’s not really what your body is looking for.”