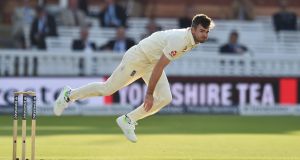 Anderson was left stranded on 499 as Ben Stokes’s career-best six-wicket haul consigned the Windies’ first innings to 123 all out.

But after Stokes had then hit 60 runs for good measure to help eke out a lead of 71, Anderson wasted no time second time round when he clean-bowled opener Kraigg Brathwaite in just his second over as the tourists reached 93 for three at the close of a rain-shortened day two.

In that bigger picture, England have the edge after an often manic struggle for bat against ball under persistent cloud cover so far throughout most of this decisive third Test.

Their all-time leading wicket-taker added the one more wicket he still needed by knocking back Brathwaite’s middle stump, completing the memorable feat of great skill and endurance in the 129th Test of his 14-year career to date.

The 35-year-old has therefore reached elite global company, one of just six bowlers in the all-time list with 500 to his name – and as soon as he did so, he raised his right arm to salute the crowd and then ran to his former captain Alastair Cook in the slips to begin his celebrations.

He has joined two seam-bowling greats, Australia’s Glenn McGrath and West Indies’ Courtney Walsh, in the 500 club – with Sri Lanka spinner Muttiah Muralitharan top of the pile on an astounding 800 wickets and Shane Warne and Anil Kumble also above the pace trio.

There is an extra symmetry to Anderson’s achievement, because it came on the same ground where he took his first Test wicket on debut – Zimbabwe opener Mark Vermeulen, also bowled, on the way to figures of five for 73 in May 2003.

This time, however, much hard work remained if England were to consolidate after Stokes had extended his outstanding all-round contribution with the only half-century of the match.

Stokes responded to England’s own adversity against Kemar Roach (five for 72) by cracking 10 fours in a 51-ball 50 before number 10 Stuart Broad lent a telling hand with some late hitting too in a teatime 194 all out.

England lost Dawid Malan – caught behind when Roach got one to move up the slope from round the wicket – on a drastically rain-shortened morning, in which only 4.2 overs were possible between the downpours.

After a mid-afternoon resumption, there was then a moment of fortune for Stokes.

On 24, he flashed an edge just within the range of second slip off Shannon Gabriel – but it would have been a brilliant catch had Kyle Hope held the half-chance one-handed, diving high to his left.

Jonny Bairstow was gradually beginning to play more confidently but was undone by his old foe Roach, who pinned him lbw on the back foot to end a stand of 56.

After England had scrambled into credit, Stokes thought, all too briefly, he had survived again when Gabriel bowled him only to be called for a no-ball, yet then two deliveries later disturbed middle stump a second time with some fierce pace from round the wicket.

Moeen Ali speared a catch to gully to give Roach his fifth, but England’s last two wickets bagged an unexpected and very valuable 60 runs.

Broad was chiefly responsible, rarely in line but employing the long handle to great effect – first alongside Toby Roland-Jones and then including two sixes over the off-side off Roach in company with Anderson until he was last out, caught behind trying to carve a short ball off Jason Holder (four for 54).

Back to his day job, Anderson immediately got England up and running again, and although Broad had Kieran Powell dropped in the slips on just two by Stokes, the other half of this country’s great pace-bowling partnership was soon in the final column again with an lbw verdict which sentenced Kyle Hope to yet another failure in his miserable series.

Powell and Shai Hope then recovered the Windies’ composure and kept England at bay until Anderson returned with a brilliant delivery at the start of his second spell to flick the opener’s off-bail.

There was still a sting in the tail for England, though, as Anderson found himself warned twice for running on the pitch and therefore one more transgression away from being ruled out of the attack for the remainder of the match.

1 Betting shops face uncertain future as they prepare for Monday reopening
2 Tianna Bartoletta: ‘After you’ve gotten your medal, you become black in America again’
3 Mature Ringrose keeping the ups and downs of rugby life in perspective
4 Ian O’Riordan: An education in race and running during college days in America
5 How a GAA club sprang up in east Belfast over Sunday breakfast
Real news has value SUBSCRIBE