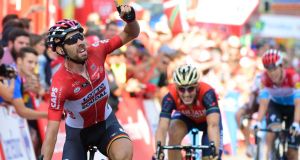 Chris Froome retained his advantage on stage 19 of La Vuelta as Belgian Thomas De Gendt won a sprint finish out of the breakaway to keep Spaniards waiting for a stage victory in their home race.

Team Sky’s Froome, bidding to become the first man to win the Tour de France and Vuelta in the same season since 1978, remains one minute and 37 seconds clear of Bahrain-Merida’s Vincenzo Nibali after the pair crossed the line within the main pack at the end of the 149.7km stage from Parque Natural de Redes to Gijon.

While the breakaway was contesting stage honours up ahead, three-time Vuelta winner Alberto Contador had attacked out of the pack of main favourites on the final climb, the Alto de San Martin de Huerces, in a bid to improve his podium chances in his final professional race.

The Spaniard, who sits fifth, three minutes and 34 seconds down and 77 seconds off the podium places, crested the climb one minute ahead of the other contenders but despite picking up the help of Trek-Segafredo team-mate Edward Theuns, he was caught by the peloton on the streets of Gijon.

The day’s 21-man breakaway were let off the leash by the Team Sky-controlled peloton early in the day, building a lead of more than 15 minutes.

Bahrain-Merida’s Ivan Garcia, conscious that Spain is running out of time to avoid a repeat of 1996 – the only other time in the 72-year history there has been no home stage winner in the Vuelta – attacked on the final climb but was soon joined by AG2R La Mondiale’s Romain Bardet.

Counter-attacks followed from the break as Irishman Nicolas Roche (BMC) and former world champion Rui Costa (Team UAE Emirates) joined the party, but by the time they arrived in Gijon, much of the rest of the break had caught up.

That set up a sprint finish and it was Lotto-Soudal’s De Gendt that took the win ahead of Trek-Segafredo’s Jarlinson Pantano, with Garcia having to settle for third.

Roche came home in eighth position on the day to move up two places to 15th on general classification.

The battle for red will now be decided on Saturday, when the peloton face a 117.5km stage from Corvero de Asturias which will conclude on the brutal climb to the finish at Alto de l’Angliru, where Bradley Wiggins surrendered the race lead in 2011.