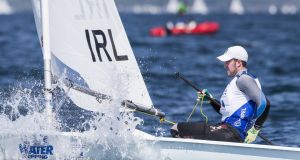 Finn Lynch of the National Yacht Club heading for seventh place in the opening race of the Laser class at the World Championships 2018 at Aarhus, Denmark. Photograph: David Branigan/Oceansport

Indications that preparations for the Tokyo 2020 Olympic Games are stepping up a gear come with the expected announcement by Irish Sailing (ISA) of the selection criteria this week.

This determines what athletes will be nominated by the ISA to the Olympic Federation of Ireland for inclusion in the national team.

The detailed document marks a milestone that commits both management and athletes to an intensive programme over the coming months, and what actions to expect for the multiple campaigns seeking a berth at the games.

The failure to qualify at the first attempt has been attributed in part to the relative youth of the current panel that counts just three veterans in Annalise Murphy, Ryan Seaton and Finn Lynch.

Multiple full-time campaigns are under way in all but the women’s skiff ,where Rio 2016 silver medallist Murphy has resumed training alongside Katie Tingle, who has recovered from an injury last summer.

The World Sailing Championships at Aarhus, Denmark, in August was the first opportunity to qualify for Tokyo, but despite several noteworthy performances none of the Irish crews in three events could make the grade.

However, training and competition planning has continued, with the next qualification regattas in July in Japan (Laser classes) and towards the end of the year for the skiffs in New Zealand.

Once qualified in a particular event the selection criteria will apply provided the minimum standard required to justify a trial is reached.

The initial criteria is two candidates finishing top half of one of the 2019 qualifying regattas held at:

If only one candidate achieves the criteria, nomination is automatic provided Ireland has been qualified in that event for Tokyo.

If a trial series is required, the combined scores from each of the following trial regattas will be used to decide the nomination:

The pool of candidate campaigns at senior cycle includes:

Two further campaigns in the men’s heavyweight single-handed event operating independently of the ISA are Fionn Lyden and Oisin McClelland. In the event that either achieve qualification for Ireland, the official criteria will apply to these athletes as well.