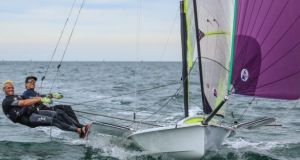 Four races remain in the qualifying series of the 49er World Championship in Auckland, New Zealand where two Irish boats are vying to qualify the nation for one of four places available for next year’s Tokyo Olympics.

The outcome of Thursday’s schedule will see the 88-boat fleet from 30 countries split into gold, silver and bronze divisions. The top 25 boats will form the leading group.

They are placed inside the top 20 boats with less than 10 points to the top 10.

World under-23 bronze medallists Robert Dickson (Howth YC) and Seán Waddilove (Skerries Sailing Club) had a third place to sit alongside their opening race win and they stand 25th overall.

The Dublin duo are competing in their first standalone 49er world championship at senior cycle. In 2018, the pair competed at the World Sailing Championships at Aarhus, Denmark.

On completion of the qualification series, the three different fleets will continue to race until Sunday afternoon when the top 10 boats overall will compete for the medal race final.

Eleven countries have already qualified for Tokyo, including an automatic place for the host nation. Four more nations will qualify this week with the remaining four places for the Olympics awarded at regional competitions next year.

1 Colin Kaepernick’s exile is too fresh for NFL to speak out on US protests
2 Ken Early: Why international football is fading into obscurity
3 GUI release protocols for return to club competitions
4 Connell losing touch with club championship is real tragedy of Normal People
5 ‘A radical departure’: Who are CVC and what are their plans for rugby?
Real news has value SUBSCRIBE

Kick It Out urges Premier League players to take a knee 20:40
PGA Tour wants players to take Covid-19 tests before attending events 18:47
Smooth return to racing in Britain gives hope going forward 17:00
Optimisim that Irish Classics won’t be domestic only 16:36
IRFU plan gives club rugby hope of return to action this year 16:36
Here is your handy guide to sport on television this week