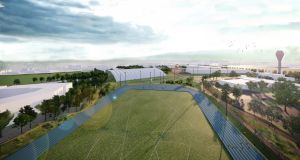 The first artist impression of the new UCD running track, which could be completed by the end of 2020.

Over 40 years since originally laid down, exactly eight years since it was ripped up, and almost two years since an anonymous €3 million donation took it off life support, work is ready to commence on the new athletics track at University College Dublin (UCD)

In a circular sent to the university staff, UCD Estate Services on Monday confirmed that construction on the new track is scheduled to commence from this coming Monday, December 2nd, “delivering a world class athletics facility for the UCD community comprising of an eight-lane 400m IAAF synthetic track and a grass infield area suitable for athletics and multiple field sports”.

For the first time, UCD Estate Services have also published an artist’s impression of the new track and it certainly looks impressive: the site, which comprises of c. 3.73 hectares on lands located at the Sports Precinct of UCD, at the Richview/Clonskeagh end of the campus, will also feature “track training lighting (up to 18m high)” and “conduit to allow for electronic timing and scoring to the infield”.

In January, planning application notice was erected at the site, and while originally estimated there could be a 19-month build period, some of which may be weather-dependent, it is possible it may be completed by the end of 2020

That may not come in time to benefit student athletes preparing for the Tokyo 2020 Olympics, but central to that €3m donation made in January 2018, the identity of the philanthropist still unknown, is that the new track be built to last. The money is enough for the building of it and also its maintenance for the next 20 years.

That original track, at the Belfield end of the campus, was also built to last and in fairness it did: first opened in June 1977, it was the first tartan running track in the Republic, until the sad demise and closure in recent years, blamed on fears for “health and safety” when effectively it was simply worn and torn.

After that original track closed, the cost of rebuilding a new one was estimated to be around €1.6 million, “subject to funding becoming available”; eight years later that work now commences.

The Clonskeagh location also fits with the now sporting end of UCD, on that west side of the campus where Leinster Rugby also have their training pitches, and next to the Olympic-size swimming pool. The absence of an athletics track had been a particularly sore point, however, UCD having the largest student body in Ireland, some 32,000 people in all.