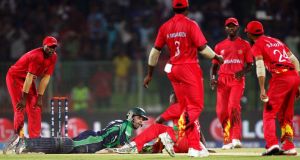 Ireland’s Stuart Thompson lies on the ground after making his ground to secure the bye that gave Ireland a three-wicket win over Zimbabwe at the ICC World Twenty20 in Sylhet, Bangladesh. Photograph: Surjeet/Inpho

What looked like an easy-going parade to victory turned into a frantic last-ball win for Ireland yesterday as they opened their World Twenty20 campaign with a three-wicket victory over Zimbabwe in Bangladesh.

Set a target of 164 on a new ground at Sylhet with some short boundaries, Ireland were perfectly poised after an opening stand of 80 from skipper William Porterfield (31) and Paul Stirling (60) had laid the foundations before Kevin O’Brien hit 15 runs in the 18th over to leave his side requiring just seven from 12 deliveries.

O’Brien departed from the final ball of the 18th over from Tinashe Panyangara and that was followed up by a brilliant over from Tendai Chatara, who conceded just three runs to leave four required from the the last six balls, with five wickets in hand.

Ireland still had the ice cool temperament of Ed Joyce at the wicket and a single off the first ball and one from the second by new batsman Stuart Thompson signalled an orderly closing in on a second T20 victory over a Test-playing nation in the space of a month.

That calmness was blown apart in two deliveries as Panyangara produced the ball of the match to shave Joyce’s leg stump with some late swing before Sean Williams ran out Max Sorensen with a direct hit.

Thompson then turned down the chance to run a second when he clipped the ball down to the third man boundary, tieing up the scores.

Seven years ago in Kingston the sides had played out a dramatic tie at the 50-over World Cup in Jamaica, but this time the nail-biting scenario of a Super Over faced Ireland if they failed to score off the final delivery.

Alex Cusack was on strike for the final ball, but he failed to get bat on to the delivery from Panyangara as it went through to wicketkeeper Brendan Taylor.

Pulled the ball
Cusack went haring down to the other end as the Zimbabwe captain attempted to throw down the stumps and run out Thompson. Deciding to shy with his glove still on, Taylor pulled the ball to the left as Thompson got through for the bye and the victory.

Ireland coach Phil Simmons was happy with the victory over the side he coached before taking up the Ireland job in 2007, if not the manner of it. “We’ll take the win but again we have to look back and see we could have won it easier than that,” said Simmons.

There were plenty of plusses for Simmons, with Stirling again showing his liking for the big occasion with his 60 runs coming off 34 deliveries after a few failures with the bat in the warm-ups.

The performance of Ireland’s three spinners was arguably the biggest factor in their success, helping rein in Zimbabwe after they got off to a powerful start having been put in by Porterfield.

Left-arm spinners have thrived in T20 cricket, and George Dockrell was outstanding in his four overs, taking two wickets for just 18 runs, including Taylor to a great catch from Joyce close to the extra cover boundary after he had top-scored with 59.

Making his T20 international debut, Andy McBrine bowled a nerveless spell of off-spin, putting plenty of revs on the ball and getting some good turn to take two for 26 from his four, while Stirling went for 24 from his allotment.

“The three spinners have been bowling very well so far on the tour and they’ve shown again today that they know what to do in a time when we need them,” added Simmons.

Next up for Ireland is a game against the United Arab Emirates on Wednesday after they went down to a six-wicket defeat to the Netherlands.

Took two wickets
Australia-born Tom Cooper starred for the Dutch, taking two wickets, scoring a long-range direct hit for a run out and making an undefeated 34 to lead the side home.

The South Australian player was only added to the Dutch squad as an injury replacement for Tim Gruitgers, who posted a YouTube video on Sunday night accusing the Dutch management of forcing him to take a scan on a back injury that he claims was not troubling him.

Cooper only became available to play after South Australia missed out on the final of the Sheffield Shield after a defeat to Tasmania last Thursday.

The International Cricket Council last night released a statement saying that the Dutch cricket board had “acted within the ICC’s tournament rules during this process”.