Lee: ‘I had to come from adversity, which makes this win all the sweeter’ 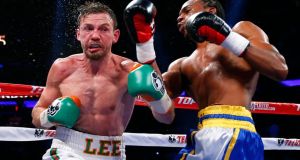 “I had to come from adversity, which makes this win all the sweeter,” said Lee. “He fought well and he is a strong kid. He was coming on in the fifth, but I caught him with a peach, and that was the equaliser.”

Lee got off to the worst possible start when he was knocked down by a mid-way through the first round, the first time he hit the canvas as a professional. To his credit, Lee was able to recover and regroup quickly but the 10-8 first round meant that he was already in a hole.

Things did not get much better in the second round for Lee, who was officially fighting for the first time as a light middleweight. Jackson walked Lee down and changed stances several times, not allowing the Limerick man to find any rhythm and tagging him several times with that overhand right that floored him in the first.

Strong puncher Lee got into the fight in the third, slipping punches, moving better and countering, but he was still open for those overhand rights. In the fourth, Jackson began to assert himself again and a fast sharp right hand snapped Lee’s head back to cap a strong round for the Virgin Islander

Going into the fifth round, Lee was behind on all three judges’ scorecards, 39-36. Jackson came out strong, hurt Lee on the ropes and began to tee off on him. Perhaps buoyed by how easy it was to hit the Irish man, Jackson wound up to throw another right, but Lee timed the punch and ended Jackson’s night. Referee Benjy Esteves jnr took one look at the motionless American on the canvas and waived the fight off with 1:07 gone as an exhilarated, and relieved, Lee bounced around the ring in delight.

Effective game plan “It’s something that Adam [Booth, trainer] and me worked on everyday in the gym

. We saw that he throws big right hands so we worked on squatting down, bending low and then throwing the hook,” said Lee, who won his fifth fight in a row since losing his world title shot against then WBC champion Julio Cesar Chavez jnr in El Paso two years ago. “I think that . . . was the best knockout of my career.”

“I ran into a real bad one. What a lucky punch,” said Jackson after the fight. Lee’s promoter, Lou DiBella, said Lee “is going to have a lot of options”.

Lee, who captured the vacant NABF title with this victory, turns 30 on Wednesday.

In the main event, Miguel Cotto (39-4, 32 KOs) beat Sergio Martinez (51-3-2, 28 KOs) to win the WBC middleweight title. With the victory, Cotto became the first Puerto Rican to win world titles in four weight divisions. Cotto dropped Martinez three times in the first round and once more in the ninth before Martinez’ trainer Pablo Sarmiento retired his fighter seconds in to the 10th.