‘I think what Rory and I have is very special,’ says tennis ace Wozniacki 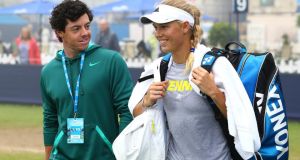 Rory McIlroy and his girlfriend Caroline Wozniacki, who rejects the suggestion that their relationship is affecting their respective sporting careers.

When Caroline Wozniacki first became the world number one in October, 2010, it seemed only a matter of time before the Dane would go on to win her first grand slam title. At a time when Serena Williams was out through injury and Venus Williams’ powers were starting to wane, her arrival was a real breath of fresh air. Here was a new face, a fun, outgoing young woman, popular with players and media alike.

In the summer of 2011 Wozniacki’s star power hit full steam when she began a relationship with Rory McIlroy. When they met, it was arguable that Wozniacki was the bigger star. Since they met McIlroy has won two Majors but been criticised for his inconsistency and Wozniacki has slipped to number nine, prompting the inevitable suggestion that their relationship has been bad for their respective games. It is a suggestion that both reject.

One has only to see the effort each makes to see the other, in their separate day jobs, to realise that the relationship is still going strong. McIlroy is a regular visitor to the tennis circuit and Wozniacki is often seen inside the ropes at the world’s top golf events.

“Golf and tennis follow the sun; we go around the world to pretty similar places. It’s not easy, but we make it work,” Wozniacki said, relaxing between matches at one of her regular Tour stops. “When you know, you know.

“I think what Rory and I have is very special. He’s trying to work it out with his schedule, I’m trying to go and see him when I can, so in that way it’s been working out well so far. We speak every day but we never have a set time where we have to speak. We just do it because we want to.”

The pair are favourites of the paparazzi but refreshingly, they don’t seem to be seeking attention as some other high-profile couples have done in the past. Not surprisingly, they are most in demand in Britain and in Denmark, but they seem to handle it well.

‘It’s nothing new’
“It’s not really difficult to deal with and I don’t really pay attention to it, to be honest,” Wozniacki said. “Because we’ve grown up and been used to the media, separately, it’s nothing new. It’s not like it’s been put on us all of a sudden. Also, the way we’ve been raised, we just do our thing and get on with it.”

Some may feel that Wozniacki is now more famous for being McIlroy’s girlfriend than for her tennis exploits. But the Dane maintains that any criticism of her abilities, of her relationship and of any aspect of her life is something she has got used to.

Just short of her 23rd birthday it seems ridiculous that Wozniacki is being written off while still so young. Though Wozniacki says she is unlikely to be playing beyond 30, she still believes in her ability and believes winning a grand slam is possible. “I think I’ve done most things that I could in the tennis world,” she said.

“Obviously winning tournaments is something that is always a priority and of course I want to do well in the grand slams, because I’ve reached finals, semi-finals and quarter-finals, but I haven’t won a grand slam yet.

“That’s something that obviously I would like to do but again I don’t put the pressure on myself because I believe when it’s meant to be, my time will be, and that’s basically it.”
Guardian Service