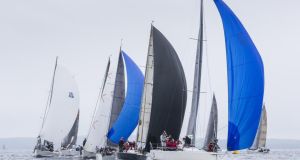 Howth boats are leading the way at the ICRA Nationals and Sovereigns Cup. Photograph: David Branigan/Oceansport

Howth boats dominate half the classes competing in the ICRA Nationals and Sovereigns Cup at the start of day two on Thursday morning at Kinsale Yacht Club.

The Dublin club sent a fleet of 15 crews south for the four-day series and despite light airs and strong ebb tide crossing the course, most were at the front end of the respective divisions.

Norbert Reilly’s Crazy Horse opened the series in Division 0 with a solid race win, setting the scene for the Howth fleet results to follow. He came under pressure in race two from Plymouth’s Andy Williams on Keronimo, the Ker 40 footer that is the runaway on the water leader.

The pair is tied on points but the British boat leads on the tie-break.

Meanwhile, clubmate David Cullen had no such issues on Checkmate V in Division 2 where two race wins in his new boat continues the stellar career of the former Nigel Biggs boat that cleaned up at almost every regatta he attended.

Richard Colwell’s Fusion, a Corby 25 heads the Division 3 boats while even in the White Sails fleet where more leisurely racing is enjoyed, Windsor Laudan on Demelza, a Howth flagship and venerated Club Shamrock leads Division 2.

However, in a quirk of the class-splits, Howth has no representation in the biggest fleet of Division 1 that includes the J109 national championship as well as some of the best-known sailors in the country.

Here, Ian Nagle’s Jelly Baby is duking it out with John Maybury’s Joker 2 and the pair hold first and second places respectively in the main series and as J109’s, are tied for the lead.

Jelly Baby is a Royal Cork entry though their Dublin rival has strong Crosshaven presence on board in the form of Olympic veteran Mark Mansfield.

There is much depth in this class and plenty of form to be found over the coming three days. Notables still to shine include Paul O’Higgins’ Rockabill V, also from the Royal Irish YC and Pat Kelly’s Storm from Rush, both past champions.