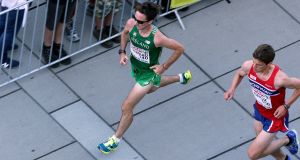 So already the selection dilemma begins, with four Irish men finishing the Berlin marathon well inside the qualifying standard for next summer’s Rio Olympics. Lizzie Lee also put herself in pole position for selection by becoming the fifth fastest Irish woman of all time.

It was, as anticipated, a perfectly swift and steady paced race from the gun, and provided a renaissance of sort for Irish marathon running: Kevin Seaward, Sergiu Ciobanu, Mick Clohisey and Paul Pollock all taking full advantage by running inside the 2:17:00 qualifying standard for Rio.

Seaward was first home 2:14:52, the 29 year-old from Belfast knocking just over four minutes off his personal best, and also the fastest Irish marathon performance in three years.

Next came Ciobanu, who ran 2:15:17, and that might well be good enough to get the Moldovan-born runner to Rio, having formally switched his allegiance to Ireland in July. The third Irish man - and with that third-best placed for selection - was Clohisey, the Raheny man also knocking over two minutes off his personal best by running 2:15:35.

Of course each country is only allowed three entrants per event at the Olympics, which means Pollock, who was actually fancied to run the quickest in Berlin, is so far only the fourth fastest, after he finished in 2:15:38, just three seconds behind Clohisey, but again well inside the necessary standard. Still, unless Pollock runs quicker in a spring marathon, the last real shot at qualifying, he will likely miss out.

So too, for now anyway, will Gary Thornton and Sean Hehir, again unless they run quicker next spring. Yet they came so close, Thornton just 19 seconds short of the standard with his 2:17:19, while Hehir clocked 2:17:48

No such worries for Lee, the Cork women finishing almost 10 minutes inside the women’s standard of 2:42:00 with her brilliant new lifetime best of 2:32:51. The Cork athlete, running in the colours of Leevale AC, is now almost certain of her selection for Rio, barring injury. The 35 year-old is also just over a year back in full competition since giving birth to her daughter, Lucy.

There will likely be at least two women joining her however, with both Fionnuala Britton and Maria McCambridge scheduled to run marathons next month in Chicago and Frankfurt respectively.

For now anyway Ireland is set to have its full quota of men’s marathon representatives for the first time since Barcelona in 1992. It was a partly joint effort too, as Seaward, Ciobanu, Clohisey, Thornton and Hehir ran together for long periods, passing the halfway mark in 67:37, with Pollock in another group not far back. Mark Hanrahan and Thomas Fitzpatrick were also running inside 2:17:00-pace early on, only to fade in the closing miles.

The outright winner in Berlin was the Kenya Eliud Kipchoge, who ran a very swift 2:04:01, with countryman Eliud Kiptanui second 2:05:22.

1 Gordon D’Arcy: If Farrell can tap into our self-worth, we’re all on a winner
2 Winds of change as Ireland name a refreshed team, picked on form
3 Ireland’s 10 Test matches this year will decide World Cup ranking
4 Who is Caelan Doris? Meet Ireland’s newest rugby star
5 Big paycheques lure the world’s best to Saudi Arabia
Real news has value SUBSCRIBE