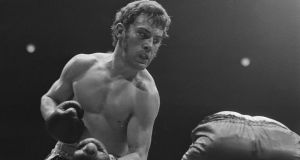 Crawley-born Minter won Olympic bronze at Munich in 1972 and went on to capture the British and European middleweight titles before he was granted his opportunity to fight on the world stage.

He claimed the WBC and WBA titles with a split decision win over Vito Antuofermo in March 1980 in Las Vegas but Minter’s reign lasted a matter of months as he was beaten by the great Marvin Hagler at Wembley Arena.

The Sussex southpaw ended his professional career the following year after being stopped inside three rounds by compatriot Tony Sibson, retiring with a record of 39 wins, nine defeats and one no-contest.

“The stewards and staff of the British Boxing Board of Control are very saddened to hear of the passing of former world middleweight champion Alan Minter,” a brief BBBoC statement said.

“Our sincerest condolences are sent to his family at this time.”

Minter earned his opportunity to face Antuofermo by winning eight fights in a row and the Briton was crowned world champion at Caesars Palace after a contentious points win in which the scorecards differed dramatically.

But he dealt with his Italian rival decisively in their June 1980 rematch at Wembley Arena, Antuofermo retiring after eight rounds due to cuts around his eyes.

Minter, nicknamed ‘Boom Boom’, returned to the London venue to face Hagler in September of that year, only to be over-matched against his American foe.

Minter was cut under both eyes and took a number of heavy shots en route to being stopped in the third round, after which Hagler went on to establish himself as one of the all-time great 160lb fighters.

Minter fought three more times after his bout with Hagler, outpointing Ernie Singletary before a split-decision defeat against Mustafa Hamsho was followed by another loss to Sibson in September 1981.

Former world heavyweight champion Frank Bruno led the tributes to Minter, writing on Twitter: “Alan Minter RIP. Alan and I worked together many times a great boxer in his day I would ask people to look at the old footage of him fighting a great boxer a sad day for British Boxing RIP ‘Boom Boom’.”

Former two-weight world champion Ricky Hatton added: “Just heard the very sad news that our boxing family has lost one of our own in former world champion Alan Minter.

“You’ll always be a British boxing legend and a gentleman Alan. My love and very best wishes go out to Ross and the whole Minter family at this time.”