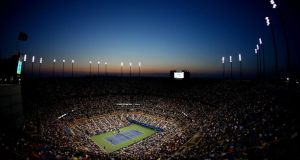 The sunsets as Roger Federer of Switzerland plays against Marinko Matosevic of Australia during their men’s singles first round match on Day Two of the 2014 US Open in New York. Photograph: Streeter Lecka/Getty Images

Roger Federer put on a show in front of Michael Jordan to reach the second round of the US Open.

Federer tweeted a picture with the former basketball great on Monday and Jordan was in the Swiss star’s box as he opened his campaign at Flushing Meadows with a 6-3 6-4 7-6 (7/4) win over Marinko Matosevic.

Federer arrived in New York brimming with confidence after reaching the final at his last four tournaments and winning his first Masters title for two years in Cincinnati last weekend.

Australian Matosevic, who has acquired the nickname ‘Mad Dog’, is a feisty competitor but it was not long before he was being forced to admire Federer’s shots.

Matosevic did a pretty good job of holding onto his serve under pressure but Federer finally broke through to lead 5-3 in the first set and then did so again in the seventh game of the second.

Federer was really turning on the style by this point, and a ‘tweener’ shot between his legs that hit Matosevic had Jordan in stitches.

When Federer broke serve again in the seventh game of the third set, it appeared the end was nigh, and Matosevic tried to lighten his darkening mood by engaging with Jordan, pointing at him and saying, ‘I just want to be like Mike’.

Federer had only faced two break points in the match, saving both of them, but an unexpected lapse allowed his opponent to hit straight back.

When Federer trailed 3-1 in the tie-break, a fourth set looked like it might be on the cards, but the second seed only lost one more point and finished off the victory with an emphatic smash — Jordan no doubt approving of the air he got.

Federer, who plays Matosevic’s countryman Sam Groth in the second round, said: “Marinko has got a big game, I was never quite sure what to expect.

“I’m happy I came through. It was a bit more difficult than I thought it would be in the third set when I had a break. But it’s always good to win tie-breaks.” Federer and Jordan have collaborated on a pair of tennis trainers, which the Swiss wore for the first time in a match on Tuesday night.

“It’s just amazing having Michael here,” said Federer. “Growing up he was my big sporting idol. Having him here is unbelievably special and the collaboration is unique. I love it.”