Sailing: Clock ticking down to Tokyo as Irish crews yet to qualify 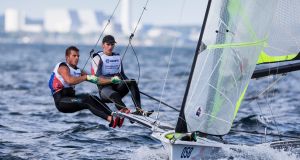 After a busy summer season for Ireland’s Olympic sailing hopefuls, strong results tinged with financial reality have resulted in a rollercoaster ride as the clock ticks down to Tokyo 2020, now just over 20 months away.

Gold, silver and bronze medals at under-23 level are all strong indicators of future Olympic form, but possibly not until the Paris 2024 games.

However, Ireland has still to qualify for any of its selected events – single-handed Laser for both men and women and 49er and 49erFX skiff events – following the first opportunity at the combined Sailing World Championships in Denmark two months ago.

“We sent the youngest team ever to a world championship qualifier [for the Olympics 2020] but we didn’t get any qualified for Tokyo,” Irish Sailing Performance director James O’Callaghan told The Irish Times. “We had hoped to get one over the line . . . It would have been a great boost for our programme at this stage.”

O’Callaghan points out that the worlds in Denmark two months ago wasn’t all bad, with both Finn Lynch (Laser Standard) and Aoife Hopkins (Laser Radial) winning a race each at Gold fleet level, an indicator of their full potential in that neither race result was a fluke.

“The senior race wins at world championship level are the benchmarks of future potential that coaches are looking for.”

Aside from the senior worlds at Aarhus, where close to 1,500 competitors were in action over 10 days, the season also produced medals at other world championships.

Howth’s Robert Dickson, sailing with Seán Waddilove of Skerries, delivered an emphatic statement of their potential by taking gold at the 49er under-23 worlds at the Paris 2024 Olympic regatta venue in Marseille just weeks after competing in Denmark.

The season also saw Laser sailor Liam Glynn take bronze at under-21 world level and Tom Higgins take the under-17 silver at the Laser Radial worlds.

“By any standard, coming home with three world championship medals is a fantastic achievement,” said O’Callaghan. “The hard decisions are more around funding than performance.”

The 49er development squad has now been folded even after delivering a world championship gold medal: the growth in the pathway has outstripped the financial resource.

Instead of having a standalone development squad for the 49er with four crews sailing, there’s a single two-boat squad comprising the best of the up-and-coming development sailors – Dickson and Waddilove on the strength of their Gold medal performance – along with double-Olympian Ryan Seaton and his new crew-mate Seafra Guilfoyle as the existing senior campaign.

“For the first time in a long time we’ve had a fully-populated pathway with potential for junior all the way to Olympic level,” said O’Callaghan.

With a €1.2 million annual budget ring-fenced from Sport Ireland for Performance Sailing, O’Callaghan’s ambition is to achieve €2.2 million, with the shortfall met by a combination of commercial revenue and funds generated by the Irish Sailing Foundation, which is pursuing philanthropic donations.

In terms of qualifying Ireland for the 2020 games, the focus is on July 2019 for the Laser Standard and Radial classes, while December is the next opportunity for the 49er and 49erFX skiff classes.

In the case of the women’s skiff event, that late-year championship fixture is good news for Annalise Murphy’s new campaign with crewmate Katie Tingle, who suffered a broken arm during a training session at Dún Laoghaire last month.

The Cork sailor underwent surgery soon after the incident and is expected to recover in time to return to training by the end of November.

Meanwhile, the Performance Sailing HQ in Dún Laoghaire this week cleared the last of the planning hurdles, and the centre is expected to be completed next month. However, it is likely to be next spring before it is fully utilised on a daily basis by the athletes.