England to announce return of Peter Moores as coach

Lancashire boss will be joined by Paul Farbrace as number two 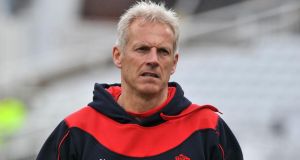 England will announce that the Lancashire coach, Peter Moores, will be their new head coach, at a press conference at Lord’s on Saturday morning. Paul Farbrace, the former Kent wicketkeeper who recently led Sri Lanka to the World Twenty20 title, will be Moores’s number two.

Nobody was expecting the culmination of an exhaustive process that has lasted for the best part of three months to come so soon. For Moores, it will be five years since his previous stint in charge was brought to an end by Kevin Pietersen.

Moores is due to take charge of Lancashire in their County Championship game against Warwickshire at Old Trafford on Sunday. Ashley Giles, his major rival for the job, has been in limbo since returning from the World Twenty20 after England’s shock defeat by the Netherlands.

It is thought that Moores has also been asked to provide input on an assistant.

Paul Downton, who has been leading the process as the managing director of England cricket, chaired an interview panel on Wednesday. Nottinghamshire’s director of cricket, Mick Newell, and Mark Robinson of Sussex have also been involved, with suggestions that Robinson might be approached to work alongside Moores or Giles.

With little more than three weeks until England play their first international of the summer, a one-day match against Scotland in Aberdeen on May 9th, there had been some speculation that an announcement could possibly be made as early as Thursday. When nothing emerged the belief grew that any announcement would have to come after Easter.

Speaking at the start of the month, Moores said that he had learned from his first spell as coach. “Yes I did make mistakes,” said the 51-year-old former Sussex and Worcestershire wicketkeeper. “I look back at some things and think there were definitely things we could have tackled differently.

“Having done the job before you learn a lot. I have had five or six years to reflect on a lot of things that did work (and) things that didn’t. You learn as you get more experience and hopefully make better decisions than in the past because you have seen situations come up before and you have an understanding of what is needed.”

Moores, who lost the job in January 2009 just before the team were due to head to the West Indies, added: “There is an excitement to have another go at it. There was a frustration last time. When you have a job you always have a vision of where you want to take it. There is a draw to go back and work in that environment because you are working with great players.”

Jimmy Anderson, one of a younger generation of players who relished Moores’s England regime even before they linked up together at Lancashire, argued that he deserved credit for the success the team went on to enjoy under Andy Flower.

“He probably started off one of our best periods as a team for many years,” Anderson said. “I think Andy Flower would say that the success he had as a coach, he learned a lot from working as assistant to Peter. So yes, I think he deserves some credit.”