England at rock bottom after 5-0 Ashes humiliation against Australia

Mitchell Johnson is the star for Aussies, the left-armer returning 37 wickets at 13.97; Brad Haddin also plays a pivotal role 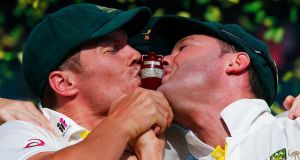 It was pink at the Sydney Cricket Ground: Jane McGrath day, a tradition on the third day of the Sydney Test. The sun shone and the Sunday crowd buzzed but they never got to see the day through as England subsided tamely to the juggernaut that has been Australia this past month and a half.

In the pink? Widows’ weeds would be appropriate. Set to make 448 to win, a ludicrous proposition given the nature of the bowling and its use of an increasingly capricious pitch with uneven bounce exaggerated by the pace of Mitchell Johnson and Ryan Harris, they were bowled out for 166 in just 31 overs and four balls. Four of those wickets went in the space of 10 deliveries in the two overs immediately after the tea interval to continue a dismal sequence of batting collapses that has players scurrying around the dressing room looking for kit as if this was one of those repeatable panic dreams. Perhaps it will be in the months to come.

End came
The end came at 4.23pm, less than an hour after tea, the honour of the final wicket, his fifth of the innings, going to Harris, this magnificent tank of a bowler with the delicate wrist action of a needlewoman at her embroidery. The final slip catch was taken by Michael Clarke, who has led his team with instinct, skill and innovation to turn around the situation from six months ago when there was even doubt whether he was up to the task of helping regenerate the team.

As the captain took the catch above his head at second slip and flung it high, the players leapt at him and bowler before grouping on the pitch and performing what appeared to be their team song. The surface still looked to be dry afterwards so presumably that is all they did.

Harris, with match figures of 8 for 61 was a deserving man of the match, the fourth of five given to the bowlers in the series, three of them to Johnson. But player of the series went to Johnson, who claimed 37 wickets at 13.97 apiece, bowled with a hostility not seen from an Australian in this country for 40 years and generally terrorised the England batsmen, although there cannot be a person who would have quibbled had it gone to Brad Haddin, who made 493 runs, eclipsing Adam Gilchrist as most scored by a number seven or lower in a five-match series. With good first-innings runs in each match, always in adversity, he was absolutely pivotal to their success.

Sits uneasily
So Clarke’s Australia, just as Ricky Ponting’s before him, have wrought a terrible 5-0 revenge for defeat in England. The loss, by 281 runs, sits uneasily alongside those of 381 in Brisbane, 218 in Adelaide, 150 in Perth, and eight wickets in Melbourne: an aggregate loss of 1,030 runs and eight wickets in other words and a galaxy away from the Gabba where on the first day of the first Test Australia, at one stage, were 132 for six.

Has there ever been such a comprehensive trouncing? Only Michael Carberry, who for an hour cast off the shackles that have bound him during the series and played expansively for 43, offered any resistance until Ben Stokes decided to clamber into Nathan Lyon with the game in its death throes, and clobber him for 24 from eight balls on the way to making 32 before dragging another big shot on to his stumps. In the context of all that has gone, he alone can escape opprobrium, for he has been unfazed, indeed inspired by the contest.
A total of 279 runs in four matches, in a series in which no England batsman reached 300, the only century and 15 wickets is a massive achievement. Stuart Broad flung the bat towards the end, hitting 42 with three fours and four sixes, to further damage Lyon’s figures, but by then it was desperate stuff. It was yet another numbing performance by England’s batsmen, not devoid of heart or intent, but totally wearied by defeat and the ferocity of the contest. With more than seven sessions of the match remaining, the game was never going to be drawn and, given the conditions, it was going to come down to when and how Australia would win.

Cook had hooked
Before the second over was out, Alastair Cook had hooked Johnson handsomely but was then gone to him, his aggregate for the series 246, which is 65 fewer than he managed in Brisbane alone three years ago. It has been desperately tough for a young man who has held his dignity throughout.

Carberry had decided that if this was to be his last Test innings, he would not depart wondering what might have been had he played with a little more instinct. He hit some crunching drives, had his bat broken in half while defending Harris (it might have summed up his series had the wood fallen on his stumps but it hung there, hinged by the sticker on the front), and then flashed hard at Johnson’s second ball after tea to set off a collapse that saw Gary Ballance lbw to a nasty combination of high velocity and low bounce in the same over, whereupon Jonny Bairstow and Scott Borthwick perished in Lyon’s next over. Goodness knows what had been put in the teapot.

Play his strokes
Before that, Ian Bell had also decided to play his strokes, until he glided Harris low to gully, a shot that when he is playing well and there is no coterie of close catchers brings him runs galore. Kevin Pietersen, booed to the wicket in that unedifyingly boorish manner that used to greet Ponting in England, lasted 10 balls before he tried to flick Harris to midwicket but edged on to his pad so that George Bailey was able to take an athletic catch at short leg.

Earlier, Australia had managed to extend their innings into the afternoon session, reaching 276, before England bowled them out for a second time, the first occasion they have done so in the series. In the morning Chris Rogers, a player who has found his time late in cricket life, completed his second hundred of the series, a beautifully composed innings full of fluency and punchy offside shots. It was his third Ashes century, indeed Test century, in seven matches and no batsman on either side has scored more runs over the course of the two series.

Bizarrely Borthwick claimed three wickets, one with a delivery that actually bounced, which means he tops the bowling averages. Rather sums it up.
Guardian Service

1 Farrell and O’Connell provide insight into changes in Ireland’s analysis
2 Sideline Cut: Vignette shows why Bird is the true shark in The Last Dance
3 Andrew Porter diary: Meat, veg and intermittent fasting the order of the day
4 Anfield and Cheltenham show sports again lacking in looking after their own
5 Louise Galvin’s rugby career on hold for work on the frontline
Real news has value SUBSCRIBE

Anfield and Cheltenham show sports again lacking in looking after their own 07:00
Louise Galvin’s rugby career on hold for work on the frontline 06:30
Jack McCaffrey praises GAA’s community effort during Covid-19 outbreak 06:00
Aidan O’Shea sees both sides of the equation when it comes to professionalism 06:56
Farrell and O’Connell provide insight into changes in Ireland’s analysis 06:00
Here is your handy guide to sport on television this week