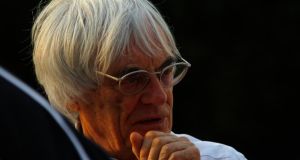 Formula One supremo Bernie Ecclestone has rejected a last-ditch plea for this weekend’s Bahrain Grand Prix to be cancelled.

In the build up to the race, protests in a number of villages across the Gulf island kingdom continue on a daily basis.

On Tuesday, marches took place in Barbar, Salmabad, Karbabad and Sitra, as well as one on the outskirts of the capital Manama where the race will be held.

Protesters carried banners bearing the words ‘No For Bloody F1 in Bahrain’, whilst others banged drums and chanted ‘Yascot Hamad’ or ‘Down with (King) Hamad’, Bahrain’s ruler.

That is despite the fact a new law was passed on Sunday which will result in any protester who insults King Hamad being jailed for up to five years.

What is evident is that unlike last year when the police waded in with teargas and sound bombs to disperse the demonstrators — with one man killed during the violence — they are maintaining a lower profile 12 months on.

With media from around the world in tow — again far different to a year ago when only permanently-accredited F1 journalists were given visas — the Bahrain government is seemingly playing it safe.

But given Bahrain’s history on human rights, it prompted four non-governmental organisations to this week write a letter to Ecclestone, the teams and their sponsors calling for a rethink on their commitment to the race.

It claimed if the race went ahead “it will be taking place in a country whose government continues to commit gross human rights violations, from arbitrary arrests to torture”.

The letter added: “Given the global controversy and public outcry, last year’s Bahrain Grand Prix was an embarrassment to the sport and all those who took part.

“The race was used by the Bahrain government to broadcast a false picture of normality to the outside world, whilst also preventing entry to journalists who wanted to see the reality on the ground.

“The 2012 race was held under conditions which effectively amounted to martial law.

“In the weeks preceding it, many activists and protest leaders were arrested, some of whom subsequently spent months in jail.

“Foreign journalists were attacked, arrested, and even deported.

“During the weekend of the race, a young man, Salah Abbas Habib, was shot dead by security forces. His body, bearing marks of torture, was dumped on a rooftop.

“The situation in Bahrain has not improved since last year. If anything, it is getting worse.

“The Bahrain government has made many pledges of reform, but it is doing nothing to implement them.

“By continuing to race... Formula One is facilitating the culture of impunity through which the authorities have operated.”

The letter concluded: “We hope you do not repeat last year’s mistake.

“If you do, you will again be allowing a repressive regime to hijack your sport for political purposes, whilst it also unleashes further repression to try and silence its critics.

“We therefore urge you to respect human rights and cancel your plans to participate in the Bahrain Grand Prix.”

The letter follows on from that issued by the All Party Parliamentary Group for Democracy in Bahrain, and an early day motion in the British House of Commons, demanding the race be scrapped.

Ecclestone, who revealed this week to listening to the protestors’ demands last year — and claimed he would be willing to do so again — ultimately ploughed on despite the event being a public-relations disaster for Bahrain.

In this instance, in directly responding to the NGOs via a letter of his own, Ecclestone was short and to the point in dismissing their calls for a cancellation.

In the letter, Ecclestone wrote: “It is a great shame that this was not brought to me before September 2012 when the FIA Formula One World Championship calendar was formed and it is now too late to make any changes to the calendar.

“I have not received any complaints from any journalists concerning their accreditation to this year’s event.”

Protests are scheduled to continue over the next few days ahead of the race on Sunday.