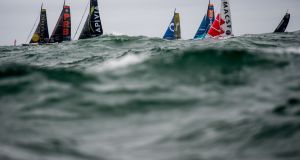 Skippers aboard their Imoca 60 monohulls at the start of the Vendée Globe solo monohull sailing race. File photograph: Getty

The text message was stilted and to the point: “I need assistance. I am sinking. This is not a joke. MAYDAY.”

Kevin Escoffier was 22 days into the Vendée Globe, the non-stop, round-the-world sailing race done every four years, when a roaring 15ft wave overwhelmed his boat, folding it in half, on Monday, nearly a thousand miles off the tip of South Africa. In seconds, his 60ft carbon-fibre boat filled with water.

He dashed off the message to his support crew in France, shimmied into his neoprene survival suit and grabbed his emergency beacon to direct rescuers to his position.

As he pulled the inflation cord for his life raft, he was swept off the boat. Worried that the shards of carbon washing around him from the mast and hull would puncture the raft, he cut the tether, setting him and the raft free.

Escoffier was experiencing every mariner’s worst nightmare. But he had hope.

The Vendée Globe is a race in which, at the height of catastrophe, usually only your fellow competitors can save you. And that is when Escoffier’s closest competitor, Jean Le Cam, showed up.

The rescue that unfolded had its share of drama, but in the end Escoffier ended up on Le Cam’s boat, marvelling at his good fortune.

“It’s life,” said a visibly shaken Escoffier in a video call interview on Tuesday from Le Cam’s boat, which is called Yes We Cam! He was in third place when his boat started sinking. “I could feel being unlucky or feel lucky to be rescued and safe here,” said Escoffier. “I’m choosing to feel lucky.”

When asked if he was worried while in his life raft, Escoffier replied: “No. As soon as I had seen Jean I was sure I would be saved.”

With an older boat and without the powerful and fast hydrofoils of the leaders like Escoffier, Le Cam has surprised the fleet by leading at times and running near the top of the peloton in this 24,000-mile race, which started in France. But then he had to change course to rescue his fellow French man.

Escoffier said Le Cam was uniquely qualified to rescue people at sea. Besides his 40 years of ocean racing experience, he has been in Escoffier’s shoes. His Imoca 60 capsized during the Vendée Globe in January 2009, also in the southern ocean, hundreds of miles off Cape Horn.

Huddled within his upturned hull for 16 hours, cold and with no communications, Le Cam was rescued by a rival, Vincent Riou, in a boat sponsored by PRB, which is Escoffier’s current sponsor.

Escoffier recalled their first conversation after the rescue.

“We hugged each other,’’ he said, recalling Le Cam’s punctuating his excitement with an expletive and saying, “that was tricky!”

“I replied: ‘I have spoiled your race. You were doing so well.’ He replied: ‘That doesn’t matter. Last time it was me who upset Vincent’s race.’ ”

Le Cam is now in the rare position of having been rescued and now being a rescuer. He said he did not take that lightly.

“It’s part of the job of a sailor to go to the aid of another,” said Le Cam on Tuesday as Escoffier stood watch outside the cockpit door. “Above and beyond – it’s human nature to go to people in need and help them. It’s part of life, physically or psychologically, to help another human. I am just part of that.”

On Wednesday, French president Emmanuel Macron congratulated Le Cam on his skills. “I was reassured by the news. I am a fan of Jean’s. So I wanted to say hats off to him. We are extremely proud of Kevin and you and for the whole family and of what you did.”

It took two hours from when Le Cam stopped racing to when he first spotted Escoffier on his life raft. Le Cam developed engine trouble as he came to his aid and shouted to Escoffier that he would be back. (Engines can be used in emergencies. The propeller has a seal that is to be broken only for self-rescue or rescuing another sailor.) But when Le Cam returned to Escoffier’s last known position, the raft was gone and race officials told three other skippers to divert to the area and start a search.

Using his instincts, Le Cam decided to double back to the original location emitted by Escoffier’s emergency beacon. “I went there and he was not there,” said Le Cam. “I was thinking I should go dead downwind. And by chance I saw a strobe on the raft, 1½ miles away from the position.”

The pair have yet to decide what to do with Escoffier, who is not allowed to help Le Cam with the sailing. The closest land, at Cape Town, is upwind, a boat-breaking trip Le Cam took off the table. The more likely option is meeting with a French navy ship at the Kerguelen Islands, three to four days away by sail, to transfer Escoffier to that ship and allow Le Cam to continue racing alone.

There are strict requirements for documenting time spent assisting other sailors. Race management will take the location of the four boats when they diverted to help Escoffier and the point where they began racing again. From there, they will decide how much time to credit for the rescue.

Of the 33 starters, Escoffier is the third to leave the race. Often, fewer than half the starters finish it.

Despite his chances for success, the usually talkative Le Cam could not think too much about the future. “Just yesterday we were on a journey,” he said as he scratched his head and rubbed his eyes. “Now we are on calls with journalists all day. We don’t have a minute to have a reflection for the future. We have to sleep and rest and after tomorrow we will see.” – New York Times