Game will take place at the 110,000-capacity Motera Stadium in Ahmedabad 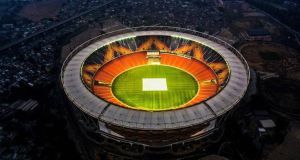 After one win each in the series and with two to play, the third Test between India and England at Ahmedabad’s hulking great Motera Stadium would be a blockbuster affair regardless of the day-night element. The two teams have served up a treat thus far, in keeping with what feels a wider golden period for Test cricket.

But as well as a more palatable 9am start time for viewers here, the pink ball and the prospect of floodlit cricket in whites brings an extra frisson of excitement and intrigue. The fast bowlers, we are told, are licking their lips, while the batsmen will enter the 110,000-capacity arena – possibly half full – knowing the sooner their eyes adjust to the flash of cerise hurtling towards them at speeds of up to 95mph, the better.

There have been 30 day-night Tests since the first in 2015 and, barring a drawn match, all manner of scenarios have played out. Australia amassed a whopping 539 for three declared against Pakistan in late 2019, the highest of nine totals of more than 400 and powered by David Warner’s unbeaten 335, and yet eight teams have also found themselves skittled for less than 130.

The sorriest of these blowouts belong to India – and England, too – and came during their most recent outings against the pink ball. Joe Root’s men were vaporised by New Zealand’s Trent Boult and Tim Southee to end up 58 all out in 2018 – having been 29 for nine at one stage – and had the sandpaper affair in Cape Town to thank for diverting attentions elsewhere; Virat Kohli’s side were rolled for 36 all out by Josh Hazlewood and Pat Cummins in Adelaide last December.

“Barring that 45 minutes of bad cricket we dominated the Test match,” Kohli insisted on Tuesday at the pre-match press conference. He wasn’t wrong, with the eventual eight-wicket victory for Australia summing up the potential jeopardy on offer here and, looking back with the benefit of hindsight, how the superior side on show can still suddenly find itself in strife.

Kohli said that bowling-wise the tactic could be to hold a line during the day and attack under the floodlights, yet it is notable that both India’s and England’s double-digit affairs came before the switch was flicked. There has been plenty said about how the combination of the pink ball and the twilight period can leave batsmen struggling, while the evening dew in India could also become a factor here. But, even when the ground is drenched in sunshine, anything is possible.

Another factor is the pitch. Root has noted more live grass than during the first two Tests but, after the one-sided match last week, it has also been allowed to become biscuit-dry for India’s spinners. Not only does this vex English minds as they flirt with playing an extra seamer, it could yet provide another test for their batsmen. Ravichandran Ashwin, for example, is a Swiss Army knife of variations and the pink SG ball could make these trickier to pick up.

Seamers will be more prominent and reports from the nets suggest swing is on offer. Ishant Sharma, playing his 100th Test, will threaten the right-handers with the ball that comes in, while Jasprit Bumrah returns – most likely at the expense of the wrist-spinner Kuldeep Yadav – and his lasered yorkers could cause carnage. India are also mulling over whether to draft in Umesh Yadav for Mohammed Siraj, given the brawny fast bowler is fit after a calf strain and has 96 wickets at 24 on home soil.

“We probably have, among other teams, the best bowling attack in the world,” said Kohli. “So we are not bothered about what the ball might bring differently to the table. We are ready for anything that comes our way.”

England, meanwhile, are toying with up to five changes – two in the top order, three among the bowlers – and 24 hours out from the toss Root gave little away. A decision over Chris Woakes or Dom Bess at No 8 will dictate the balance of the attack – and could be influenced by the lack of overs from Ben Stokes thus far – while it may be that Stuart Broad is squeezed out by the return of Jimmy Anderson and Jofra Archer, as well as fears over a long tail.

India’s batting is settled while for England it appears a question of whether the availability of Zak Crawley, after injury, and Jonny Bairstow, after rest, leads to one or two of the top three making way. The expectation is Dan Lawrence will, having been slightly shoehorned in at No 3, but Rory Burns has also invited some debate about his spot as opener through a low-key run of scores.

If just one change is made it could be that Bairstow, who is without a Test central contract, is preferred to Crawley, who very much has one. Root insisted this difference in status – one which once again highlights issues with the current red/white system – will not be a factor in deliberations, however, with he and the head coach Chris Silverwood interested solely in the task at hand.

Root said: “These are headaches we didn’t have a year or so ago. That’s testament to the hard work these guys have put in.”

So, too, is the series scoreline. England were spun away in the last match and India will once again start out as favourites. But with the day-night format able to produce passages of play that flip this notion on its head, and the quicks very much back in vogue, they could yet emerge in the pink. – Guardian

Gatland considering Jersey as base for Lions ahead of series 11:24
LeBron James tells Zlatan Ibrahimovic: ‘I will never shut up’ 11:31
Michael Walker: Why Marcelo Bielsa is manager of the season so far 08:00
Matt Williams: Offloading skill has been obliterated from this Ireland attack 07:00
From purses to TV ratings: How Tiger Woods changed the face of golf 06:30