Leon Reid: ‘You can’t be Irish because you’re black’

Irish athlete talks about how he deals with ongoing online abuse 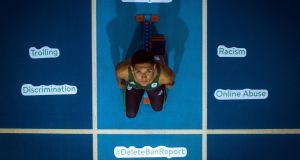 Just when Leon Reid thinks he’s already seen and heard it all he gets another reminder some people will always like to judge him by the colour of his skin or the sound of his voice. Especially when he tells them he’s Irish.

In Madrid this week ahead of racing the 60 metres at the World Indoor Tour final on Wednesday, Reid was strolling through the hotel lobby on Monday evening when an American woman approached him asking where she might get a bottle of water. And after asking where he was from then said, “how can you be Irish, you’re black?”

The 26-year-old Reid is well used to such talk, if not in person then certainly online, in part because he started out running for Great Britain, before switching to Ireland in 2018. That opened a whole new box of prejudice, which is also why he wanted to help front the new campaign by the Olympic Federation of Ireland, Don’t Scroll By, which targets online hate speech and discrimination.

“When I first switched from GB to Ireland, some people were like ‘you’re not Irish, you don’t have an Irish accent’,” says Reid. “Then it would be like ‘well you can’t be Irish because you’re black’. Just small things like that, or that I was only doing this because it was an easy way out from GB, stuff like that.

“But my mum was born in Ireland, and my adopted mum is from southern Ireland, it’s a bit annoying having to repeat yourself, but it’s just those little comments that nick away with you.

“I know it’s not just happening to me, as you know it’s happening to a lot of the footballers, even superstars like Ian Wright. It goes straight to the top, all the way down to the bottom, so I’m caught up in this web of just fake people, sending online hate, and even on Instagram now, just go on anyone’s page, you can always find a negative comment or backlash, even if it’s something positive.”

Born in Bath and later growing up in Bristol, Reid has spoken before how one of his childhood homes had become a sort of “crack den”; he spent time in around a dozen foster homes in England, through which he first came in contact with Claire Russell, living in the UK at the time and whose parents were from Enniscorthy in Wexford, who adopted him when he was 11 and again at age 18. His birth mother Anne-Marie had hailed from Belfast and struggled with addiction for many years before she died in 2016. His father is half English and half Jamaican.

He won a series of underage sprint medals when representing Britain, including a silver medal in the European Under-20 200m in 2013. Citing a “lack of leadership” in British athletics, he looked to switch allegiance to Ireland in 2017, that transfer coming through just in time for the 2018 European Championships in Berlin, where he made the 200m final. His 200m best is 20.27, and he’s currently well on track to qualify for Tokyo this summer.

That transfer only brought more attention to his social media accounts, and Reid admits the rush to judgment wasn’t always easy to handle, or indeed ignore.

“It definitely grew when I first said I wanted to switch. And it’s all the fake accounts that just pop up here, there and everywhere. And you can always tell, they’ve got no followers. As I’ve said before it could be the guy sitting next to me and I’d never know. It’s like ‘you’re not even Irish, you’re black, you shouldn’t be running for the country, you’re a disgrace . . . ’ All of this, and that built up to the switch, and then after that I was able to delete the accounts, block them, or just ignore them, I just try not to give anyone any time if it’s not positive.”

Like everything else around racism and the like, awareness is still central to the issue: “I wouldn’t say it’s got better, it’s always there, because it’s so accessible, if it’s not Twitter it’s Instagram, if it’s not TikTok it’s Facebook, and all these accounts just come out of nowhere. So at the moment it’s literally about if you see it, stamp it out.

Racing in Ireland for Menapians AC in Wexford, Reid improved his indoor 200m best to 20.99 seconds at the weekend, and his 60m best to 6.68 seconds, earning his place on the Irish team for the European Indoor Championships in Poland the weekend after next. Representing Ireland, naturally.