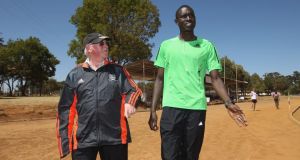 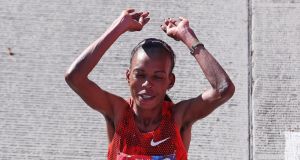 Rita Jeptoo of Kenya celebrates after winning of the 2014 Bank of America Chicago Marathon on October 12, 2014 in Chicago, Illinois. Jeptoo had tested positive for EPO two days before the New York Marathon on November 2nd. Photograph: Getty Images

It’s rainy season in Iten, and dark clouds can linger, for days, blanketing the village that lies perched at 7,875ft on the western escarpment of Kenya’s Great Rift Valley.

Still visible on the only road that runs through it are two red rectangular arches, on the way in and out, the Kenyan flag painted down each side, and six words written across the top in large white capital letters: Welcome to Iten – Home of Champions.

This is no exaggeration. No village on earth – or indeed country, for that matter – has produced more distance running champions than Iten. No one even keeps track anymore, such is the number of Olympic and World champions who were born, raised or else moved here to train. When big city marathon winners are included the list of champions runs to several hundred.

In the nearly 40 years Brother Colm O’Connell has lived and coached distance runners here the rainy season is a minor inconvenience. Unlike in Mallow, Cork, where he grew up, the seasons in Iten are more reliable. By early December, the skies will be clear, and remain so for months.

Only this rainy season feels distinctly different. For the first time, Br Colm also feels the dark cloud of doping hanging over Iten. It’s no longer a passing threat, but a grim and sobering reality, with no sign of when, or if, it will ever clear. At stake is the wonderfully and previously squeaky clean reputation of Kenyan distance running, which Br Colm has spent much of his life nurturing and championing. “I think of the old phrase, ‘tell me it isn’t so’, but it is so,” he says. “Like a lot of people, I would always have considered the elite Kenyan distance runners to be clean. That image has been shattered. And as a coach, it definitely knocks a bit of the wind out of your sails.

“And once a country is being fingered, like Kenya now is, it’s very hard to shake it off. It can take years, or it might never be shaken off. That’s the sad part. The damage has been done. Are there more cases in the pipeline? That’s the big question now.”

This raised some concern within the Kenyan athletics fraternity, plus some of the foreign athletes who had frequently gone to Iten to train, including Britain’s Paula Radcliffe, and more recently Mo Farah.

Elite athletes have been travelling to Iten and its neighbouring towns for several years, not so much searching for Kenya’s secret to success, but more to benefit from their simple yet strictly regimental training, usually three times a day, over very hilly roads, at these very high altitudes.

Then, two days before the New York Marathon, on November 2nd, came the most damning warning sign so far: Rita Jeptoo, Kenya’s top woman’s marathon runner, had tested positive for EPO, and although her B-sample has yet to confirm the finding, no one is exactly screaming her innocence. Instead, Jeptoo joins the fast growing list of Kenyans to test positive since 2012 (now running at 19).

Jeptoo spent much of her career living and training in Iten, although she’s now based at nearby Kaptagat. When the news of her positive test broke, she was on her way to the New York Marathon to collect the $500,000 World Marathon Majors bonus prize, following her back-to-wins in the Boston and Chicago marathons. She’s won’t get that prize now.

Wilson Kipsang and Mary Keitany went on to claim the top prizes in New York, both of whom still live and train in Iten. Runner-up to Keitany was Jeptoo’s training partner Jemina Sungong, who also failed a doping test two years ago, although later had it reversed.

Br Colm still lives in the thick of the Kenyan athletics scene, in a small house in the grounds of St Patrick’s High School in Iten, where he taught for 17 years (including seven as headmaster). It was during that time, as a missionary teacher, he helped convert Kenya into a nation famous for its distance runners: it started with Peter Rono, who he coached to Olympic 1,500-metre glory in 1988, and continues to this day, with 800m world record holder and Olympic champion David Rudisha.

“It’s been big news, in Iten, a real shocker,” he says. “Stories of Kenyan doping had been coming more to the fore, in the last two or three years, but with Rita testing positive, that really does hype it up again. Initially you’re shocked, or maybe in denial. But then there is a level of acceptance, and with that some anger.

“Because there was always likely to be a point where Kenyan got sucked in to more Western values, where sport is more like a business, and some people try to win at all costs, with less loyalty to their country, or athletic fraternity. One of the things I tried to do in Kenya, from the very beginning, was to teach the importance of competing with honesty, and integrity.

“And for me, in Iten, and interacting with the athletes that I do, I have never witnessed anything firsthand. Now it does feel like all Kenyan runners are being tarnished with the same brush. And even for me, yes. It makes me feel, after all my years with St Patrick’s, is this how it’s going to end up? Everyone doubting Kenyan athletics?”

There are also signs the Kenyan athletics federation ignored the warnings. Kisorio’s claims were never properly investigated, and Iasiah Kiplagat, head of Kenyan athletics, has repeatedly downplayed the accusations, and sudden spike in positive tests, although last year, in a sort of knee-jerk reaction, he gave all unregistered foreign coaches one week to leave the country.

Yet Kenya’s doping problem appears more rooted within the country, particularly the doctors and pharmacists open to administering doping products, for even modest under-the-table payments, and writing them off as medical treatments (malaria apparently the most popular one). There are also plenty of foreign agents and coaches on the scene, including two Italians, Jeptoo’s coach Claudio Berardelli and agent Federico Rosa (son of long-serving coach and Kenyan mentor Dr Gabriele Rosa). Kisorio also trained with Rosa’s group.

Federico Rosa isn’t denying there is a problem with one of his athletes, and speaking in New York last weekend, admitted Kenya has a real problem with doping (although denying he had anything to do with it): “Today, yes, absolutely. (And for) five, six, seven years maximum. Something has to be done, together with the world’s major agents, to clean up the history of Kenyan athletes, because the history of Kenyan athletes is different from what’s going on is this situation.”

“So David himself is very disappointed by all of this, because he knows it damages his reputation, too. He’s out there trying to market himself, Kenya, and all of the sport, then this happens. And it’s shaken him, no question. But one important thing is that these positive tests are coming from the road runners, not so much the elite track athletes. Because the money they can make on the road is quite mind-boggling. Like, what even €50,000 can do to the life of a Kenyan. It’s a fortune, and with that maybe comes some greater temptation.

“Unless you are one, two or three in the world, there is very little money to be earned on the track. All the money now is in road races, and if someone is thinking we can win two or three major marathons, before we are caught, then maybe they would consider it a risk worth taking.

“And many athletes in Kenya do put everything into running, as soon as they finish high school, so perhaps that does lead to greater temptation. But that is no excuse, either, and I would definitely not exempt any athlete from some of the responsibility, no matter what they say. This is not a case of someone slipping something into their drink. With EPO, we know, it has to be more sophisticated, so the athlete must realise there is something going on here, and not just the coach, or the manager.”

“But really the Kenyan athletics federation has to sit up now, take notice, stop saying to themselves there is no problem, stop blaming foreign coaches and managers. There has been talk of setting up a testing centre in Eldoret (a larger town close to Iten), but that hasn’t happened yet. So the IAAF, or Wada, and Kenyan athletics, need to take that on now, and make sure a testing centre is built.

Now aged 33, she first broke onto the athletics stage in 2004, winning the Stockholm and Milan Marathon, then Boston, in 2006. Yet she was only third in Boston in ’08, and fourth in New York, and afterwards decided to miss 2009, giving birth to her first child. She returned in 2011, finished fifth in Rotterdam and Boston, then in 2013, won back the Boston title, and also the Chicago marathon. Jeptoo repeated that feat this year, running a course record of 2:18:57 in Boston, before winning Chicago, last month, earning her the $500,000 bonus. However, Jeptoo has since returned a positive sample for EPO, from an out-of-competition test taken in Kenya, on September 25th, and pending the outcome of the B-sample, is facing a two-year ban and loss of the $500,000 bonus.

1 Ireland’s autumn of discontent continues with abysmal Georgia showing
2 Ireland 23 Georgia 10: How the Irish players rated
3 No fireworks but Limerick get the job done against Galway
4 Ireland grind their way to grisly win over Georgia
5 Jim McGuinness: There is a way to save championship and make it competitive
Real news has value SUBSCRIBE