Final catch on Lough Sheelin proves one to remember; and Heart of Sea memorial plans 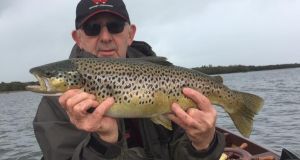 Last Monday saw the end of the 2020 fishing season on Lough Sheelin. The closure applies not only for trout but for all fish until March 1st, 2021. While most trout lakes closed their waters on September 30th, in normal times anglers would travel to Sheelin to extend their last days of trout fishing with the later finishing date.

However, due to the ongoing coronavirus crises, the Government moved all counties on to Level 3 which included instructions to remain within your residential county unless for essential travel and this impacted on end of season attendees on Sheelin.

Angling numbers were in the double figures on most days with an increase at the weekend. Winds were predominantly west to southwesterly and fishing conditions were as good as you could get at this late stage of the season.

Trout were lively and took flies aggressively. Reports of fish behaviour varied radically from “lots” of fish pitching to “only one or two”. Some good trout were caught and in great condition, weights averaging from 2½lb to over 6lb, with two or three five-pounders in the mix.

The Dabblers featured heavily as did Pat Magee’s Rambler fly, Bumbles, Silver Daddies, the Kate McLaren and the Stimulator. The Stimulator, in particular, has fished consistently well throughout the season. A great attractor pattern, this fly resembles many things while imitating nothing in particular and most importantly the trout go for it.

Mick Kelly’s Claret Stimulator works wonders on Sheelin so it would be worth seeking out a few from him for next season. Patterns with muddler-style heads and hopper legs got results and claret was a popular colour along with green, yellow and silver.

Oliver McCormack’s magnificent trout of 6.2lb on a Green Peter Bumble at Orangefield, topped the pole of 24 trout for the last week of the season.

For the past number of years, Lough Lene Anglers’ Association has held a raffle for a 5.7m (19ft) lake boat with all proceeds going to a worthy charity. This year, the charity selected was the North Westmeath Hospice who received a cheque for €17,000. The lucky winner of the boat was Frank Fox.

Heart of the Sea memorial

A memorial to commemorate those lost at sea is finally in sight for a coastal village in west Cork. For the past 12 months, Baltimore Rath and the Islands Community Council has liaised with Cork County Council and the local community and has now acquired planning permission to erect the memorial.

The memorial, “Croí na Mara” (the Heart of the Sea), a sculpture of copper, bronze and stainless steel, is a collaborative work between the Community Council and two local artists, Helen Walsh and Paddy McCormack.

The artists’ sketch shows the structure made up of two waves, aims to capture the power of the sea. Further detail shows the parting sea forming two copper and bronze perforated waves rising from the ground into the shape of a heart.

Copper rings, representing the souls lost to the sea, are drawn up through the heartstrings and released into the air.

The structure will be located overlooking Baltimore Pier and the aim is to make the memorial area as inclusive as possible for people to remember friends and loved ones by looking through the heart shaped space, to the water in the harbour and beyond.

The council is currently fundraising to reach a target of €35,000 to see the project completed and would be very grateful to those who would consider donating to the project.

If you have any queries or would like to donate, email baltimoreseamemorial@gmail.com.