Ireland forced to move warm-weather tour from Malaysia over coronavirus 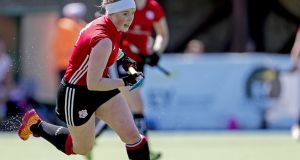 Naomi Carroll will be looking to add to her 111 caps on Ireland’s tour to South Africa. Photograph: Laszlo Geczo/Inpho

Megan Frazer and Naomi Carroll have both been handed great opportunities to force their way back into the Olympic hockey reckoning after lengthy spells out injured.

Both were named in Sean Dancer’s 21-player Ireland panel to travel to Durban next month in a hastily rearranged warm-weather tour which was originally due to be in Malaysia.

That was changed due to the coronavirus and so South Africa – where China and Japan have taken up residence – will be the base for 20-day camp which will feature eight international matches.

Frazer will be hoping to play in her first Irish match since last summer’s FIH Series in Banbridge when she suffered her latest knee injury. All told, she has played just 10 games for the Green Army since 2016 due to those ongoing issues following cruciate damage, with five of them coming at the 2018 World Cup, showing the high esteem former coach Graham Shaw held her in.

Carroll – capped 111 times – is also on the comeback trail after knee ligament problems sustained while playing Gaelic football for Clare ruled her out for the whole of last season.

Since returning, she has been in sparkling form for Catholic Institute, with seven goals in the EY Hockey League to date, while she also earned a call-up to the Irish indoor team’s European Championship campaign.

Also on the comeback trail are Zoe Wilson and Nicci Daly, the latter scoring in her first game of the season for Loreto last weekend with a typical high-quality goal.

Shirley McCay is included despite missing Pegasus’ trip to Limerick last weekend with a broken toe which should heal in time.

There is also a potential first cup for 19-year-old Carlow woman Ellie McLoughlin. She takes over the role of reserve goalkeeper from Lizzie Murphy for this series.

All told, 14 of the side that earned the Olympic ticket last November are included with Deirdre Duke, Chloe Watkins, Serena Barr and Murphy stepping out this time.