In the men’s league, leaders Templeogue travel to Kerry to take on Killorglin 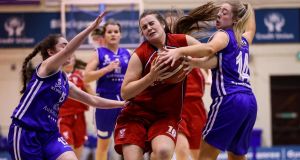 A Cork derby will be the first game for National Cup runners-up Brunell as they travel across town to face UCC Glanmire at the Mardyke Arena on Friday night in the women’s Super League.

With the cup competition now over for another year, this will be a crucial clash for both sides.

Brunell come into the game off the back of a league win over DCU Mercy, while Glanmire will be hoping their second Cork derby in three weeks goes better than their first, having lost to Fr Mathews in their most recent league game.

Elsewhere, cup champions and unbeaten league leaders Liffey Celtics will face Killester at home on Saturday evening. Liffey will be aiming to keep their unbeaten run so far this season intact, while Killester will be hoping to pick up some vital points having lost out in a nail-biter to Wildcats on their last outing.

Wildcats travel to Galway to face bottom-of-the-table NUIG Mystics, who are still chasing a first win of the season. The final game of the weekend sees DCU Mercy play Marble City Hawks in Dublin.

Meanwhile, in the men’s Super League, leaders Templeogue will travel to Kerry this weekend to take on Killorglin. Killorglin, who lost to bottom side Moycullen in their last league outing, will be hoping to cause an upset against the Dubliners to get some vital points, but it will need a lot to trouble an in-form Templeogue.

Elsewhere, Cup champions Killester are on the road to Cork to face C and S Neptune, while Maree will be aiming to take the points at home when they welcome Swords Thunder.

UCC Demons welcome bottom-of-the-table Moycullen, who will be hoping to build on their recent win against Killorglin to help edge them off the bottom.