Conor McGregor has Nate Diaz well sized up for fall

Conor McGregor appears on US talk show Conan and demonstrates on host Conan O'Brien how he intends to defeat Nate Diaz in his upcoming UFC fight. Video: Conan/TBS 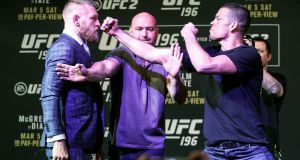 Conor McGregor may be facing Nate Diaz at UFC 196 on Saturday, but he will be doing it with one eye firmly on the next fight – and the next UFC belt.

When Rafael dos Anjos pulled out of their encounter for the lightweight UFC belt, McGregor’s chance of being the first man to hold titles in two different weight divisions went with it.

“There’s a lot of people that play it safe in the game,” McGregor told yet another raucous press conference. “There’s many scared pussies in the fight game. They don’t take risks, and people who don’t take risks will never climb to the next level. I take risks.”

Up stepped replacement Nate Diaz, on the proviso that McGregor moved up to welterweight to meet him. Having agreed to do so, McGregor immediately began eyeing that belt, held by Diaz’s rival Robbie Lawler as well.

Depending on Saturday’s result, it could happen at UFC 200 in July – and if McGregor dispatches Diaz as easily as he says he will, the next title will be his to choose.

“Your little gazelle friends are going to be looking at you through the cage as you get eaten alive,” McGregor told Diaz. “And they’re going to say we’re never going to cross this river again.”

The lack of a belt up for grabs on Saturday should have taken some of the sting about what would otherwise have been one of the biggest nights in the history of the UFC, but the winner will be in pole position for a crack at Lawler’s belt when the time comes.

“I’m open to considering whatever he wants to do,” White told reporters. “Conor really does step up and fight anybody, anywhere, anytime. It’s impressive.”

Asked who his ideal opponent would be, McGregor cracked a smile.

“I’d love to fight myself. Imagine the numbers that would do, if there was two of me.”

The withdrawal of Dos Anjos and the shot at the lightweight belt led to disappointment in the McGregor camp, but it didn’t take them long to find the positives.

For Kavanagh, a loss to the teak-tough Diaz is unthinkable.

“It’s hard to envisage anything other than a first-round KO. The way Nate moves, he walks forward – he’s a real warrior, but maybe it’s not the smartest way to fight, to exchange blow for blow.

“We’ve seen Conor’s one-punch ability to stop people, and I haven’t seen that from Nate. If you’re in a gunfight and someone has the higher-calibre gun, I wouldn’t go shot for shot.”

“One fight at a time. This kind of came on as a surprise, going from lightweight to welterweight,” Kavanagh explains.

“We welcome the challenge. Who knows? Let’s do the best fight we can on Saturday, and then on Sunday let’s see where the next big money and the next best option is.”

Peppered with bravado and salvoes of four-letter words, it might look like the press conferences are simply two brash fighters talking trash, but this is all part of building a brand in a sport that is unashamedly macho, inside and outside the octagon. The trash talk also belies McGregor’s fighting intelligence, his ability to read an opponent and find a weakness that he can exploit.

There may be no belt up for grabs on Saturday night, but on Sunday morning McGregor will know which one he is setting his sights on next. Both Lawler and Dos Anjos will be watching with bated breath.

1 Ireland backrow of O’Mahony, Van der Flier and Stander to be retained against England
2 On healing and wild hurling: The re-education of Diarmuid Lyng
3 Triple bogey costs Rory McIlroy as Adam Scott prevails at Riviera
4 Wexford best the weather and Kilkenny on a mad day to be hurling
5 Solskjaer unable to say if Paul Pogba will play for Manchester United again
Real news has value SUBSCRIBE