The UFC pre-fight news conference ahead of the rematch between Conor McGregor and Nate Diaz had to be hastily abandoned after violence erupted, with objects begin thrown and police having to intervene to keep the two camps apart. 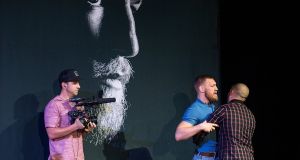 “The Vegas traffic is heavy this time of the day... There must be a McGregor show going on because the place is packed out.” Conor McGregor turned up late for the UFC 202 press-conference on Wednesday night, but he still provided the fireworks in record time.

UFC president Dana White was clearly irked by McGregor’s lateness, his opponent on Saturday night Nate Diaz put it down to “bad manners” - McGregor though arrived with no apologies.

The eagerly anticipated rematch between the UFC featherweight champion and his Californian lightweight opponent Diaz - comes five months after the Irish man was beaten in the contest between the two at UFC 196. And a little over a month after their initial rematch scheduled for UFC 200 was pulled after McGregor failed to complete media duties.

After appearing 30 minutes late in Vegas McGregor was in confident mood, but just a few questions in his American opponent walked out. “Hey, f**k your whole team, how about that?” he shouted as he made his exit - goading the 27-year-old below with hand gestures. Next there was an exchange of verbals, and with that some water bottle throwing - before White called a halt to the drama. “That’s a wrap. Get them out of here,” he said.

McGregor had only been at the table for three minutes before things kicked-off.

Both fighters clearly sick of all the build-up - even the king of trash talk is over the antics. On Saturday they can do their talking in the Octagon.