‘Sonia was a fantastic athlete, if I can go after some of those records it would be special’ 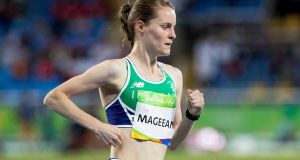 Ciara Mageean will bypass the European Team Championships in Finland later this month to focus on her preparations for the World Championships in London - and a possible crack at that still magical four-minute barrier.

Not in the mile, naturally, but Sonia O’Sullivan’s long-standing Irish 1,500 metres record of 3:58.85, set in Monte Carlo in 1995, is a time Mageean believes is now coming teasingly within range.

In her first race over the distance this season, in Rome last Thursday, Mageean clocked 4:04.49, and having finished off her season last year with a personal best of 4:01.46, second only to O’Sullivan’s Irish record, that barrier is playing a little more loudly on her mind.

“I don’t like to set limits, and I’m not saying it will come this season, but I think at some point in my career I can reach that mark,” she says. “Sonia was obviously a fantastic athlete, and her range was immense, so if I can go after some of those records it would be something special.

“And I certainly don’t think that four-minute barrier is impossible, or even a far-reaching goal any more. I think it’s very much within touching distance, and I’m going to work as hard as I can to get to it, and hopefully surpass it.

“And after running 4:01 last year, I do feel I’m knocking on it. Running 4:04 in my first race has given me extra confidence as well. I haven’t yet looked at this or that race and said ‘that’s the one to go for it’, but same as anything, I want to see personal bests in every race, in 800m as well.

“I’m still more focused on the championships, and going out to race, but if you go out to race, the times will always come. I have some races in the back of my head, sure, but I’m not going to get too caught up in times.”

Speaking at her announcement as Brand Ambassador for Pop Up Races, Mageean explained why the European Team Championships didn’t fit into her racing schedule; her 4:04.49 in Rome was comfortably inside the 4:07.50 required for London, where the 2017 World Championships will take place in the Olympic Stadium in August.

“I sat down with Jerry Kiernan (her coach) a few weeks back, picked out the races, and European Teams just weren’t on the radar. We planned our season to get me in London in the best possible shape, and that meant going back into another block of training right now. Unfortunately that means missing the European Team champs.”

Instead she’ll race in Sligo on Wednesday week, the London Diamond League, the Morton Games, then the National Championships. She also feels her run in Rome put to bed all lingering concerns about her form indoors, especially the European Indoors in Belgrade, where she dropped out.

“You’ve always got those little worries. The indoors did end with a big blow, mentally, and it was very hard. It was an accumulation of everything, really. Injury, illness, all that.

“I’ve started doing a bit with a sports psychologist as well, Kate Kirby, at the Institute of Sport. We’ve worked on a few things, and a lot of it you do yourself, intrinsically, but it’s nice to verbalise it. We are in a high demand business, and it can be tough, but I think this has helped improve me in that way.

“I know sometimes people see that as a weakness, but I’m training my body all the time, and not training my mind. But it’s a big aspect of running, sometimes plays even more of a role. You can always get the training done. But you have those little voices in your head as well, but I’m feeling a lot more confident now.”

That four-minute barrier, meanwhile, has been repeatedly broken already this year by some of the main contenders for London, Sifan Hassan taking the win in Rome in 3:56.22 - a Dutch record, Rome Olympic Stadium record; the impossibly thin German Konstanze Klosterhalfen was also rewarded with a sub-four clocking of 3:59.36 in third, with Kenya’s Winny Chebet coming through for second in 3:59.16.

For Mageean, still building on last year’s success of winning a bronze medal in the 1,500m at the European Athletics Championships, it might not be too long until she joins that sub-four club.

4 Furlong set to return for Leinster against Scarlets