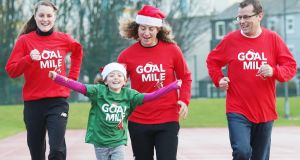 Back in her youth Ciara Mageean would always run down to her local GAA pitch on Christmas Day for a few hard laps and a few hills for afters. Those out and about Portaferry would pass her either coming or going and she didn’t need to think too hard about what they were saying to themselves.

“Look at that poor girl out running on Christmas Day, God help her . . .”

And she’d keep on running, smiling away to herself.

Mageean is smiling away now at the prospect of bringing the first Goal Mile to Portaferry this Christmas, when instead of running around on her own the plan is to be joined at the local GAA pitch by plenty of others from around the Ards Peninsula. They won’t be feeling so sorry for her now either.

“Aye, delighted they’re bringing the first Goal to Portaferry, and not just that but to be involved in it myself as an ambassador,” said Mageean, back in Dublin this week after her latest medal-winning exploits, standing second with the Irish women’s team after Sunday’s European Cross Country in Lisbon.

“This really is bringing it back to where it all began for me, where I first learned my love of sport, in Portaferry camogie club, and I spent many a happy afternoon out there training, and even now whenever I’m back up home I do a few laps.

“So I’ll be back up there on Monday with a surveyor’s wheel, measuring a mile around the top pitch. It’s not just about the run, but getting people to have a cup of tea and a few wee buns in the clubhouse after, and maybe buy a few raffle tickets too. Nothing fancy, and my mummy is already doing most of the groundwork, putting posters around town, and for such a worthy cause as well.”

Now in its 38th year, the Christmas Goal Mile is one of Ireland’s longest-running annual fundraising events. This year it is set for a record 135 locations, with all money raised going to support the work of Irish humanitarian aid agency Goal.

This is where it all began for Mageean: growing up in Portaferry, at the tip of the Ards Peninsula, She’d begin her school days with an 8.15am ferry trip across Strangford Lough to catch the bus to Assumption Grammar, Ballynahinch. Coming home now, things have changed, and she no longer gets those strange looks out running on Christmas Day or any other.

“There are actually a lot more people out running in the area now. Before, when I’d go home, I’d be the only one out running, chipping away. Now when I’m out the mountain road I see people running, cycling. We have a triathlon club there now as well. So there’s much more of a scene for activity there now, which is great to see.

“In the past, definitely, it was very much Gaelic games, hurling and camogie. So I’ll be calling on all my old GAA ties to get them out on Christmas Day, from 10am to 12pm. I know a few people have said they look forward to racing me, but I won’t be doing too much fast racing on Christmas Day.”

She remembers well those baffled looks of her neighbours back in her youth, also knowing full well that any aspiring distance runner would see Christmas Day as a training day the same as any other. “People would always be shocked, and say ‘do you not get Christmas Day off?’ Why would we? This is actually the time of year when most runners have their highest mileage. Even the people who know who I am now still think it’s half-mad. I actually enjoy it. It’s quiet, the roads are empty, and you have the run of the place.”

Having set mile bests in 2019, indoors (4:28.31) and outdoors (4:19:03), Mageean is also putting a gentle challenge to anyone who can better her times. Two days after Christmas, the hard build up to Tokyo begins in earnest when she flies out to Albuquerque for an altitude training camp with her Team New Balance. In the meantime there are one or two more award nights to attend.

“It’s been a long time coming, and for me, I would say I’ve had some very hard years, the last few years. It’s not really my cup of tea, going to award ceremonies, getting all dressed up, but believe me, there were many years where I wish I was invited, but I wasn’t performing well enough. So I’m certainly going to enjoy the Christmas, enjoy these award ceremonies, because I know they’re not guaranteed. And then it’s head down.”

Details of all the 2019 Goal Miles are listed at www.goalmile.org

1 Six Nations - Ireland v Italy: Kick-off time, TV details, team news, standings and more
2 Dan Leavy gets back in the thick of things as Leinster trounce Zebre
3 Colin Byrne: Hard to understand how golf has become the bogey man now
4 Irish duo set for AFL Grand Final as sport lifts the gloom Down Under
5 Here is your handy guide to sport on television this week
Real news has value SUBSCRIBE