Carl Frampton: ‘I felt I was a comfortable winner’ 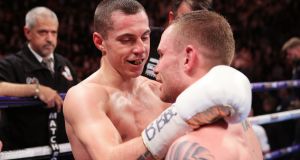 Carl Frampton expressed his disbelief at the split decision after what he felt was a “comfortable” points victory against fellow Briton Scott Quigg in their world super-bantamweight unification fight at Manchester Arena.

Northern Irishman Frampton added Bury-born Quigg’s WBA title to his own IBF belt having got the nod courtesy of 116-112 counts in his favour by two judges, with the other giving the bout to his opponent 115-113.

Frampton had looked well in control for much of a contest that was failing to live up to the hype that had preceded it, until Quigg started making more of an impression as it developed into a decent battle in the final few rounds.

Frampton told BBC Radio 5 Live afterwards: “I did what I had to do to make it easy for myself.

“I couldn’t believe what was going on when I heard the split decision — I felt I was a comfortable winner — but it’s onwards and upwards for me now.

“I knew it was going to be a tactical fight all along and a bit timid but you have to do what it takes to win.

“I’m not going to rush into silly punches. You have to be smart. I was and I got the win.”

The much-anticipated bout in front of a cacophonous 20,000 sell-out crowd marked the climax of a rivalry which had been brewing for several years between two fighters who both went into it with undefeated records.

And Frampton, 29, added: “I’m proud to have beaten a very good fighter. There’s a lot of history between our teams but he was a worthy champion.”

The final few days’ build-up had seen a dispute break out between the camps about who would use the biggest dressing room on fight night.

Frampton suggested he might “walk away” over the matter, claiming his entitlement to it as the “star of the show”, while Quigg was adamant he should have it as the home fighter.

It is understood that in the end it was locked with neither man using it — something Frampton’s camp had been suggesting as a resolution and thus looked very much like a pre-fight victory for the Belfast native.

Asked about that after winning the actual contest at the post-fight press conference, Frampton said: “I did not care about the dressing room issue, but I knew it was getting to them.

“I know Scott was very superstitious. We played a blinder!”

It was revealed in Quigg’s post-fight press conference that he had sustained a suspected broken jaw via a Frampton uppercut in the fourth round.

Quigg said that led to him being cautious for longer, and admitted of his eventual, more positive work: “Maybe I left it a bit late.”

The 27-year-old added: “I’m killing inside, absolutely devastated. But I’ll come back and I’ll be better for it.”

Quigg was in tears after the fight and it emerged Manchester United and England captain Wayne Rooney had been on hand to console him.

Quigg joked: “He said to keep my chin up — I said I’d have to keep it straight first!

“He was just saying he has lost a Champions League final and it hurts — but you have to learn from it and come back stronger.

“I’m very grateful for someone of his stature to come and give me those words.”

Quigg appeared confident as he headed to the ring first, and his entrance was met by an almighty roar — although boos were more audible than anything else.

Both men had insisted they would have the more vociferous support at the venue, and it was clear there was a considerable Northern Irish contingent in attendance, who cheered their man on heartily as he arrived.

It all made for an fantastic atmosphere — but after all the hype, the opening few rounds were a major disappointment.

Both fighters looked somewhat apprehensive, and neither landed many shots, although it was Frampton who was dictating.

Quigg started to improve, but the best work was still coming from Frampton by the end of the sixth and seventh.

In the eighth things finally started to get going properly, with Quigg enjoying some genuine success — and in the ninth he landed a big right which had Frampton temporarily shaken.

A proper battle had developed at last, and as it continued, there some more significant blows delivered by Quigg’s right first.

Frampton looked the more tired of the two, but was able to keep fighting back, and come the final bell it proved he had done enough.