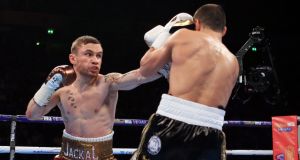 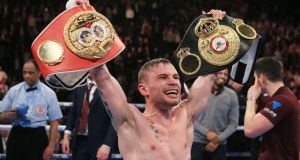 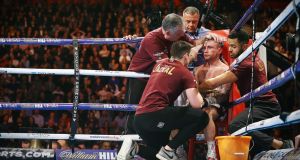 Carl Frampton during a break between rounds. Photo: William Cherry/Inpho 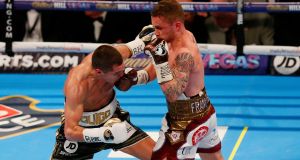 Carl Frampton has won his super-bantamweight world title fight against Scott Quigg in Manchester, getting the judges’ verdict on a split decision.

The much-anticipated showdown between two fighters who both went into it undefeated was widely regarded beforehand as a 50-50 contest, although Frampton was marginal favourite with the bookmakers.

And it was the Northern Irishman who did eventually emerge triumphant after 12 rounds in front of a cacophonous 20,000 sell-out crowd, winning on a split decision to add Bury-born Quigg’s WBA title to his own IBF belt.

The Belfast fighter dominated the early rounds with Quigg looking nervy and hesitant. But although the Bury man came on strong in the second half of the bout at the Manchester Arena, Frampton had clearly done enough to convince the judges.

While the fight was not the classic some had predicted, and certainly took a while to warm up, it had become a decent spectacle by the last few rounds, with Quigg - who had struggled to make much of an impression for much of the time up to that point - looking the likelier to land any knockout that might be coming.

The bout marked the climax of a rivalry which had been brewing for several years and seemed to increase another level in the last few days of build-up. There had been heated words and minor skirmishes between the two camps at both the final press conference and the weigh-in.

Amid that, a dispute had broken out about who would use the biggest dressing room on fight night, Frampton - who suggested he might “walk away” over the matter - claiming his entitlement to it as the “star of the show” and Quigg adamant he should have it as the home fighter. It is understood that in the end it was locked with neither man using it - something Frampton’s camp had been suggesting as a resolution and thus looked very much like a pre-fight victory for the Belfast native.

Whether Quigg was rattled by that or not, he appeared confident as he headed to the ring first in an arena which had seen him shine in his previous fight, an impressive second-round knockout victory over Spain’s Kiko Martinez last summer.

His entrance was met by an almighty roar - although boos were more audible than anything else.

Both Quigg and Frampton had insisted they would have the more vociferous support at the venue, and it was clear there was a considerable Northern Irish contingent in attendance, who cheered their man on heartily as he arrived.

It all made for a fantastic atmosphere - but after all the hype, the opening few rounds were a major disappointment. Both men looked somewhat apprehensive, and neither landed any shots of real note, although it was Frampton who was in control.

Quigg started to improve but the best work was still coming from Frampton by the end of the sixth and seventh. In the eighth things finally started to get going properly, with Quigg enjoying some genuine success for the first time, and in the ninth he landed a big right that had Frampton temporarily shaken.

A proper battle had developed at last, and as it continued, there were some more significant blows delivered by Quigg’s right first. Frampton looked the more tired of the two but was able to keep fighting back - and come the final bell it proved he had done enough.