Business as usual for dominant Nadal and Djokovic

Both players cruise to emphatic second round victories in French Open 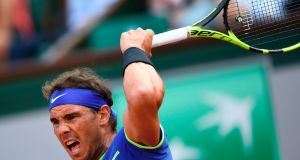 Spain’s Rafael Nadal returns the ball to Netherlands’ Robin Haase during their match at the French Open at Roland Garros. Photograph: Eric Feferberg/AFP/Getty

Of the many qualities great athletes share, ruthlessness is among the most apparent. When Rafael Nadal and Novak Djokovic advanced to the third round of the French Open on day four, almost in tandem on the two principal stages, they crushed their opponents with such familiar ease that it seemed a shame only one of them can reach the final.

If they do meet to decide who is strongest on the opposite side of the draw to Andy Murray, who plays Slovakia’s Martin Klizan on Thursday, it looks likely they will leave a trail of bruised spirits behind them.

While Djokovic was tidying up his one-sided match against João Sousa in a little over two hours, Nadal was embarking on an even quicker defeat of Robin Haase to move within one win of a century of three-set career triumphs on clay, and his 74th win at Roland Garros, his personal fiefdom where he has lost on court only twice.

Djokovic defeated Sousa 6-1, 6-4, 6-3 on Suzanne Lenglen and now has given his personal Portuguese punchbag just 24 games in four matches.

On the tournament’s showpiece court, Philippe Chatrier, the Spaniard who the French love to cheer saw off the stubborn Haase in 1 hour 49 minutes, winning a high-quality contest 6-1, 6-4, 6-3 – the same scoreline as Djokovic.Those contenders have now had two quick wins each, the perfect start to any big tournament.

Murray has not been quite so explosive. He dropped a set against the string bean Russian Andrey Kuznetsov on Tuesday, although he recovered in blinding style to win 6-4, 4-6, 6-2, 6-0. The world No1, who seems to have not a friend among the experts here, has a tricky assignment in his second match, against Klizan, one of the Tour’s more difficult customers.

In his first-round match, the Slovak got into a row with French wildcard Laurent Lokoli, who refused to shake his hand at the end – in part because he believed Klizan was feigning injury after giving up the fourth set to love and then storming back to win in five sets.

On Court 6, there was pathos and tears of joy for Steve Johnson, bathos and some world-class racket-smashing for Borna Coric. After 3hr 53min the battling American, whose father died recently, sobbed uncontrollably in celebration of a 6-2, 7-6 (8), 3-6, 7-6 (6) win that booked him a third-round match against Dominic Thiem, who earlier beat Simone Bolelli 7-5, 6-1, 6-3.

The volatile Coric, meanwhile, lost it when Johnson put the winning forehand down the line out of his reach, thrashing the ground with the same venom he had earlier applied to his ground strokes. He was aware of Johnson’s sadness but struggled to control his own emotions, storming from the small court in a rage.

Adding to the tension earlier, Johnson had to overcome a penalty point for ball abuse on match point, before they went to the final tie-break.

Elsewhere, Jo-Wilfried Tsonga endured his first opening-round defeat at a Grand Slam in a decade, going out to the world No 91 Renzo Olivo, who now faces Kyle Edmund.

Petra Kvitova, who rode into Paris on a wave of emotion after six months out recovering from a knife attack at her home in the Czech Republic, went down fighting in the second round against Bethanie Mattek-Sands, the American winning 7-6, 7-6.

“The tie-breaks showed that I don’t have [enough] matches under my belt,” Kvitova said. “Otherwise, I feel good. I’m happy I’m here and playing. The atmosphere on Court 1 was incredible. The fairytale ended; now in upcoming weeks, I think it will be business as usual. I still have the motivation.”