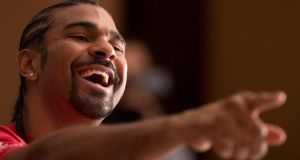 Boxer David Haye during a press conference in London yesterday.

David Haye will return to the ring against an unnamed opponent rather than wait for one of the Klitschko brothers to give him a world title shot, the former heavyweight champion said yesterday.

Haye, who lost his WBA belt in July 2011 against Ukrainian Vladimir Klitschko before beating Dereck Chisora 12 months later, said he is planning two fights in 2013.

The first will be at the Manchester Arena on June 29th. Haye has consistently said he would like to fight the elder Klitschko brother and WBC champion Vitali, but has yet to decide who he will fight next. “Instead of sitting around and waiting another year, I want to get back in there,” Haye said.