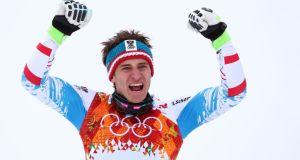 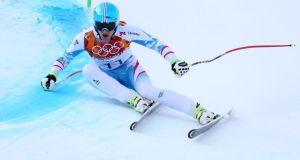 American Bode Miller failed in his bid to claim a sixth Winter Olympic medal when he could only place eighth in the men’s downhill on the slopes of Rosa Khutor on Sunday.

The 36-year-old started the race as a big favourite after dominating two of the three official training runs, and looked set to add to his collection when he led by 0.31 seconds at the second split.

But Miller fell away over the second half of the course, handing a surprise victory to Austria’s Matthias Mayer, who raced home in a time of two minutes 6.23 secs ahead of Italian Christof Innerhofer and Kjetil Jansrud of Norway.

The 23-year-old Mayer, whose father Helmut won a silver medal in the Super G at the 1988 Calgary Olympics, had never previously finished in the top five of a World Cup downhill race.

Miller said: “I’m not really sure what went wrong. I wanted to ski it as hard as I could and not really back off, but it requires a lot of tactics today which I didn’t apply.

“I feel disappointed. I skied hard and well, and that’s the most important thing. It just didn’t go all right.”

Hopes had been high for Miller after his blazing practice runs but it was Mayer, starting from a position of 11th, who set the pace.

Miller, starting 15th, led by over a quarter of a second at the first split and extended that lead at the second split, before falling away to trail the winner by 0.52s.

Innerhofer laid down the best challenge to Mayer, leading by 0.58s at the first split, and he maintained his advantage until the lower part of the course where he was nudged into silver.

Reigning downhill champion Didier Defago of Switzerland briefly threatened to become the first man to win two Olympic downhill titles as he led by 0.13s at the second split, before falling away.

The result was especially notable for the Austrian team, whose men’s alpine team faced a storm of criticism after failing to win a single medal at the Vancouver Winter Olympics four years ago.

Mayer said: “I woke up this morning and I knew that I could win this race. I was smiling the whole day, all throughout the inspection. It was my day today.”